I have been saying this for a long time, but Birthright at Skybound would end up optioned. The announcement has come out today that Rober Kirkman and Despicable Me writers Cinco Paul and Ken Daurio, are addapting Birthright for a movie. 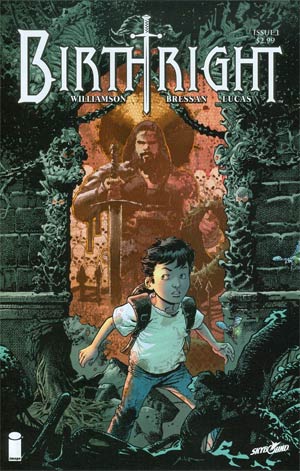 sold quickly on eBay. There are still cheap first prints of #1 at Mycomicshop.com. There was the regular cover of Birthright #1

Cinco Paul and Ken Daurio, the writers behind the Despicable Me movies, are teaming up with Robert Kirkman and his Skybound Entertainment to adapt fantasy epic comic book Birthright.
The project just got set up at Universal via Skybound’s first-look deal with the studio. Kirkman, who is also the creator of The Walking Dead, will produce along with the company’s David Alpert, Bryan Furst and Sean Furst. Jeb Brody (The Mummy, Fifty Shades of Grey) will also produce.
Written by Joshua Williamson and drawn by Andrei Bressan, the comic centers on the Rhodes family, whose young son disappears while playing outside. A year later, a grown man appears claiming to be the son and saying that he has been on another world, ushering the family on a fantastical quest to discover what really happened to their son.
Birthright joins as the third feature project to fall under Skybound’s partnership with Universal. Other titles under the deal include Robert Kirkman’s long-running comic series Invincible and the Skybound/Image comic series Kill the Minotaur.
Paul and Daurio are best known for their work in the family-friendly animation field. In addition to helping steer the Despicable franchise, they worked on Horton Hears a Who! and The Secret Life of Pets, among a slew of others.