was recently released this week with 3 covers. Cover A was not too hard to find.

, the variant that I had on my picks of the week, was a bit harder to find as it was a 1:10 variant and stores do not order heavily on Creature books. 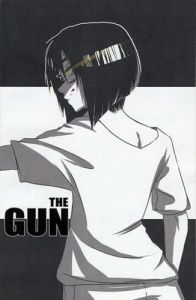 However, the one you must have is the Cover C White Fold Out Variant

. Only 58 copies were ordered through Diamond’s system, that’s right 58, so that means there are only 58 out in the wild. There were 200 printed and the unsold copies will be sold at conventions now. Be on the lookout for these and Good Luck
Next up is the book I been talking about for a while… Tommy
Written by John Ulloa and Al Bondiga with art by Juan Navarro, it is a crazy ride. There were copies printed that were for convention and promotional use and did not go through the Diamond Distributor system. The will be different than the ones at your local comic shop.
Tommy’s Solicitation:
What can you do when you find out your imaginary friend, who happens to also to be your pet rabbit, is a SERIAL KILLER, and you’re the only one who knows? Oh, and you’re seven years-old… and nobody believes you? That’s Tommy’s reality – but now he means to change it!
So here is the break down 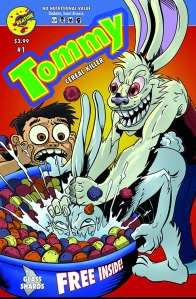 Tommy 1 Cover D “Trix Pants Down”
TOTAL Quantity: 100 books
The Cover D the controversial “PANTS DOWN VARIANT” will be the hot one with only 100 printed
There are other covers out there sets have sold for $100 on eBay already

Next up is Forgive me Father, another book I have been talking about for a while, I had the pleasure to read the series and I must say it’s incredible.
Forgive me Father is a special Project for Mr. Ulloa that he has been working on since 2003. The original #1 was released with a very, very limited print run through High Impact Comics, Issue #2 was also released in an even more of a limited print run through Bulletproof comics. After a small break from comics he returned with his company Creature Entertainment and is re-releasing and finishing the book, which comes out this spring. The High Impact and Bulletproof issues are super hard to find and will be highly sought after once the word gets out on how good the story is.
We also spoke about upcoming projects that I can’t speak about as of yet, but trust me the future looks very bright for Creature Entertainment. If you are going to C2E2 stop by their booth and say hi, tell them Mel sent you.

9 thoughts on “Ones to Watch: Creature Entertainment Upcoming Releases”