Welcome back to another new comic book week, where we all get our geek on with new books hitting the shelves at our local comic book shops.
This week is smaller than usual, seems there’s not as many new books hitting shelves, DC and Dynamite and IDW seem to have less than normal new books. There is a Paul Pope variant for M.A.S.K. #1 hitting stands, so be on the look out for that one. I know Anthony is gonna be searching for it more than likely.

This week, I’m gonna try and do something different. I usually give you the DC, Marvel and Indie pick of the week. To me though, there’s a difference between small press and independents. Of course independents are small press but to me, they’re usually driven by just the writer and artist for the most part, with a publisher. Publishers like Dark Horse, Valiant, Dynamite, Image, IDW and the guys in the middle I’m going to consider Small Press picks.. so starting this week, I’m gonna try and pick a Small Press and Indie pick. So, let me know if you like, hate.. or if you just want to tell me I’m stupid, that’s okay as well. It’s hard to hurt my feelings, just go read how Elvi treats me….. I’m like an M&M, hard candy shell but soft and gooey on the inside, I do my crying late at night offline but stay strong online.
Anyways, on with the picks.
DC/Vertigo Pick Batman Annual #1 (DC) – I’m picking this one solely for the cover. Classic shadowy Batman, perched on a roof top with Gotham buildings in the background.
Marvel Pick Ms Marvel #13 (Marvel) – Bet you were thinking I was gonna pick Ghost Rider right? Well, I love Ghost Rider, one of my favorite all time Marvel characters but I just couldn’t get into the new one. I miss the bike, I liked the old school skull.. don’t get me wrong, the art is great but just not the style I like for Ghost Rider. So instead, I give you Joelle Jones cover A variant and it’s a regular cover. This cover of Ms Marvel is just spot on. I don’t even read this but will likely pick up as I love Joelle Jones artwork.
Small Press Pick of the Week 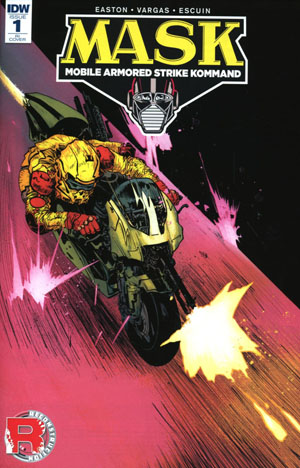 M.A.S.K. #1 Paul Pope Variant (IDW) – Yes, seems we already had a #1 but that was with their Revolution story line. My local shops didn’t order heavy on these and I don’t expect them to order heavy on this round either. So finding this variant at a good prices is going to be hard. It’s also the best looking cover besides the regular cover in my opinion. So seek it out and if you get one, wave it in Anthony’s face.. unless of course he obtains one himself.
Indie Pick of the Week 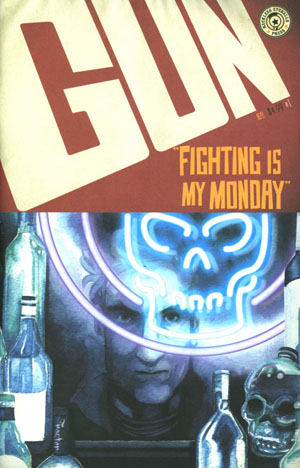 (Reckless Press – Gryphon Knights) – Expect super low print runs on this, I doubt most shops even ordered it. But this caught my eye as a possible great read.
“From the fog-shrouded docks and back alleys where crooked deals get brokered to the greasy tenement offices of fly-by-night mob doctors, GUN explores the two-fisted, twilight world of super violence through the eyes of amateur bad guy, Trevor Werner, the sinister Mister Twist.”
Already selling out at some online shops that carry it. Definitely a check out book if you ask me. (Midtown has these as releasing this week, but sold out, the may have been released previously)
That’s all for this week. Hope everyone survived the Turkey filled weekend, didn’t kill themselves putting up the holiday decorations and lights. Of course if you killed yourself this past weekend, you wouldn’t be reading this now would you?