Aloha CHUniverse and welcome everyone to the first edition of my new weekly toy write up. Lately I’ve been moving from comic collecting to toy collecting, with good reason. The vintage toy market which has been down in the dumps, starting about 7 years ago, but is coming back stronger then ever, much like comics have done in the same time frame. Toys have first appearances like comics but you will find, finding unopened 1st appearance toys is a lot harder and in most cases rarer than their comic counterparts. Each week I’ll go over a different toy set from the past or have a universal theme for the toys we talk about like “Batman” toys. I’ll try and keep as comic related as possible but some weeks we may not. By no means am I professional toy collector, so I may get things wrong from time to time. Vintage toy information is not as easy to come by as comic info. So if I make a mistake I look forward to being corrected and please do so. Now let’s talk toys! 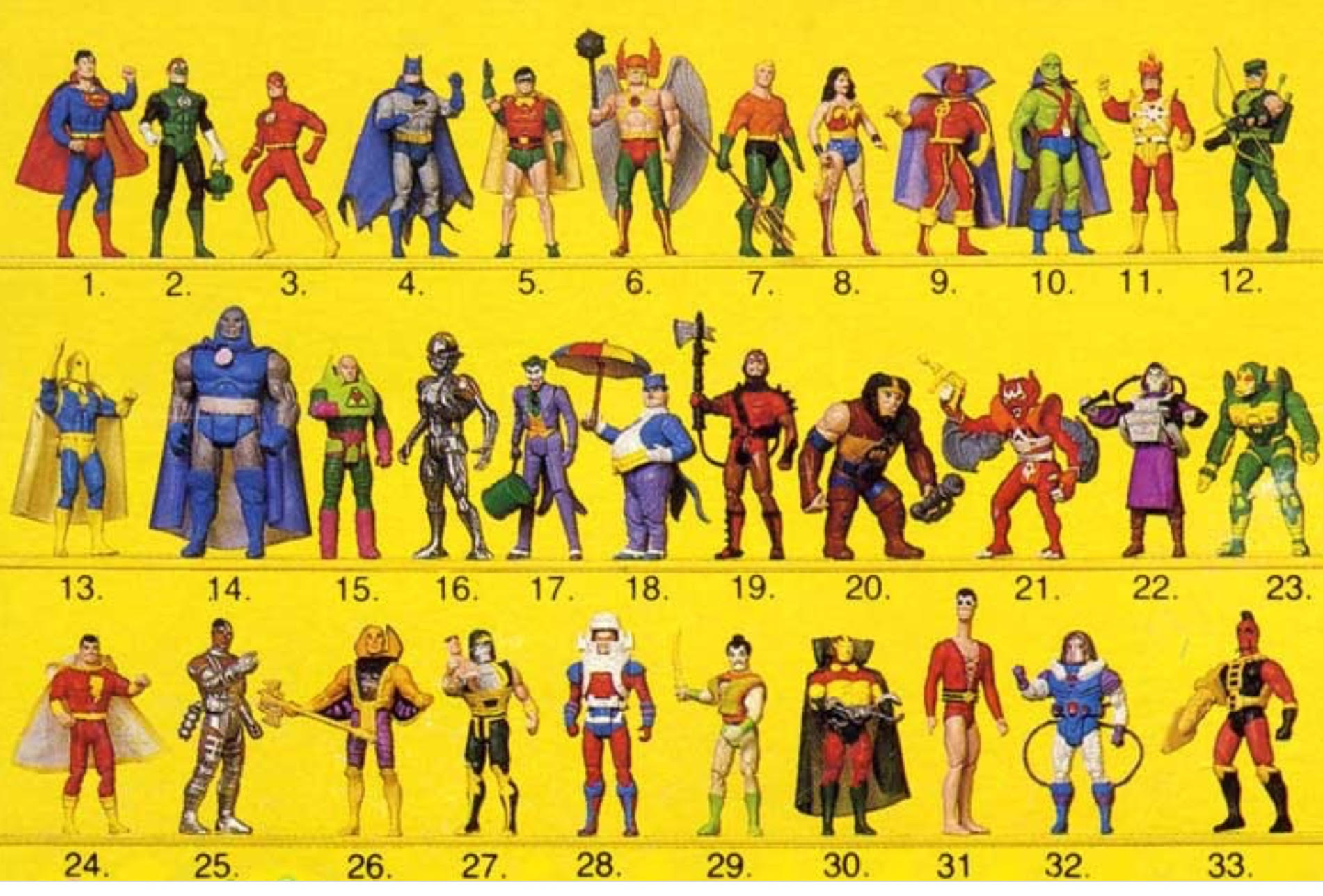 Kenner was able to steal the DC characters rights away from Mego in 1984 to create the Super Powers toy line. The toys are called “Super Powers” because when you squeeze their legs they create an action like a judo chop or wing flap. The characters in this toy line where redesigned by Jack Kirby, sadly some of the only royalties Kirby ever received in his career is from Kenner and this toy line. The toy set also spun a few comic miniseries of the same name in 1984 by Kirby and Infantino. The toys lasted 3 waves before being discontinued before a 4th wave could be released. Some of the 4th wave did later appear in foreign mass produced non-licensed fakes and recent convention exclusive releases like the Gold Superman

. The original full toy list of all 3 waves is pictured above. Just about all the toys in this Super Powers toy line are going to be first appearance toys minus the characters that were in Megos like Batman, Superman, Robin, Aquaman, Wonder Woman, Shazam, Penguin, Riddler, Arrow, and Catwoman, even though she was never officially released in Super Powers.
Here’s the full list including the 4th wave that wasn’t released and faked. Also the foreign characters like Riddler

which is just the Hal Jordan toy with a different paint job. This has became a very hot toy set as of late with some figures topping $500. Look to pay $100-$200 for a unopened Batman

(both available on eBay)

. Believe it or not, every toy in this set unopened goes for about a minimum of $80 unopened in decent condition these days. 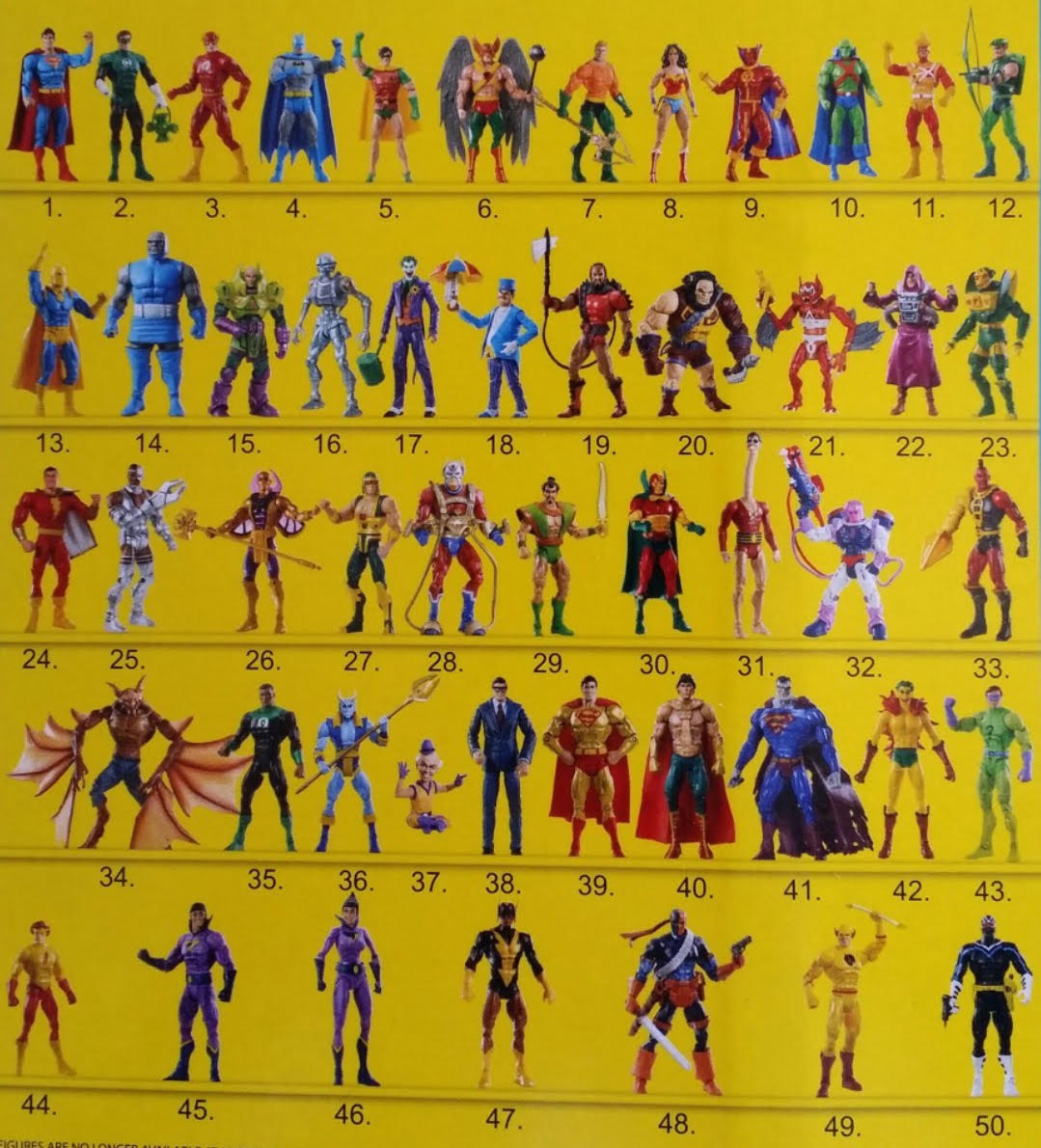 Something as meaningless as the first Parademon

because of its rarity and the recent JL flick is fetching $150-$300 dollars. 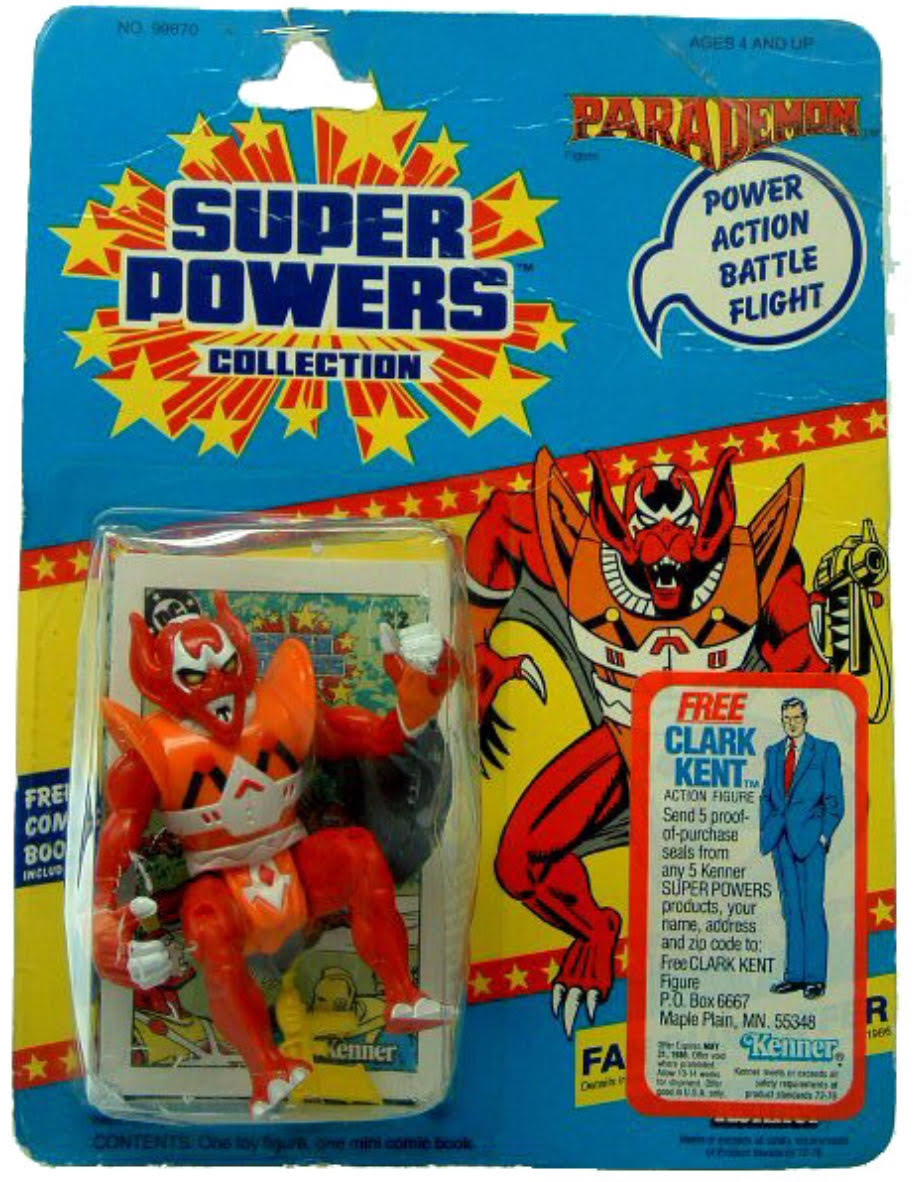 can fetch a couple hundred dollars and doesn’t come up for auction very often at all. The Darkseid

goes for about $100 now when I bought mine they were $20-$30. I should also note the Darkseid has a larger size card then the rest of the toy line they even make a specific protective clamshell case just for him.

is the grail right now for the toy line fetching $400-$700 dollars. Really rare to find even loose. All the wave 3 toys like Cyborg are hard finds. I could be wrong but I think this toy is the first black superhero toy which is a factor in its recent high priced sales. 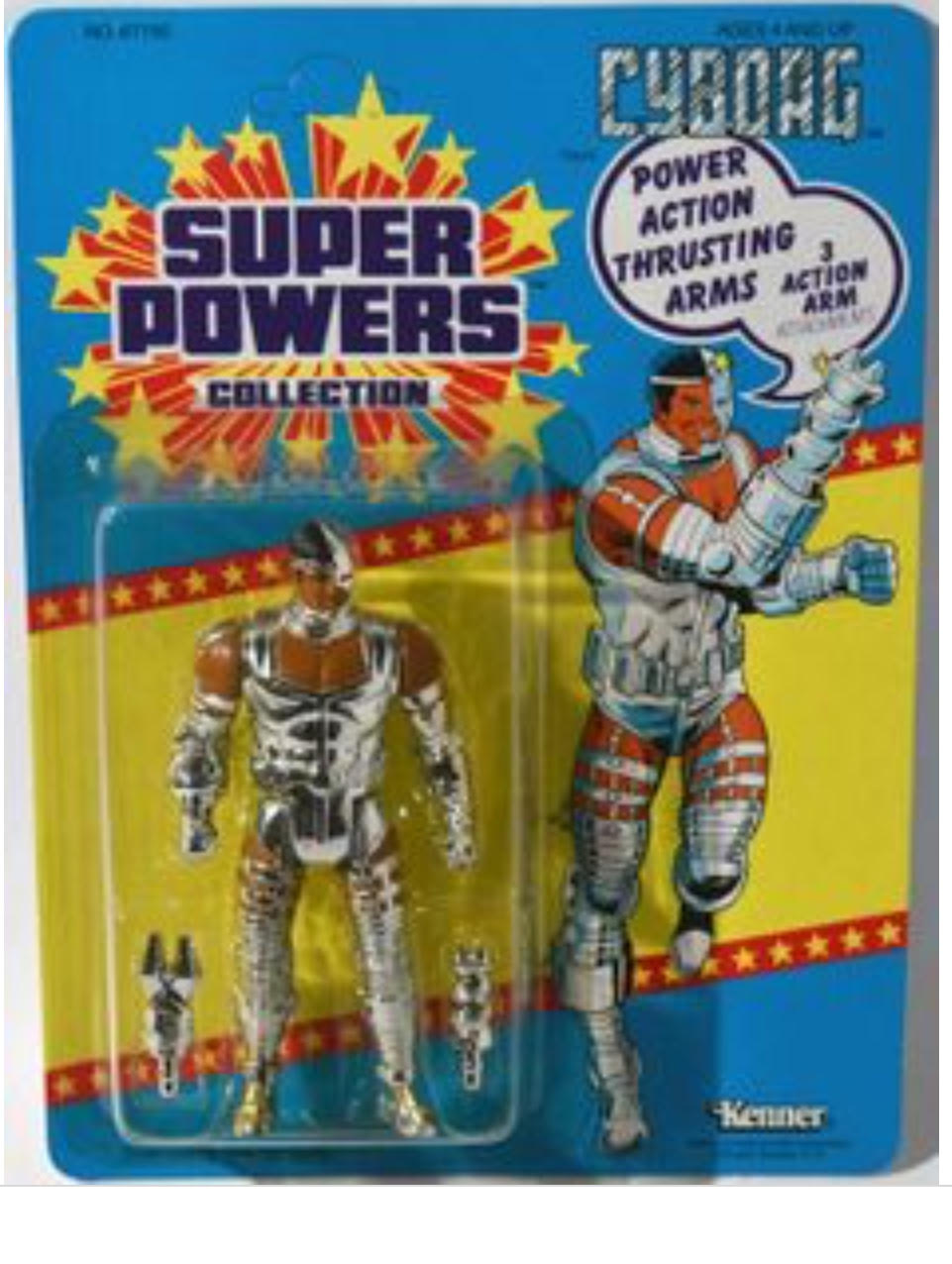 We also have a great set of vehicles in this toy line. Obviously the most popular is the Batmobile

, which fetches about $125-$200 with the box. Can pick it up loose for $10-$30 I rather stare at the toy then the box on this one. The other vehicles include Batcopter

, and the Justice Jogger

, (all available on eBay)

a hilarious mech pair of legs for Superman because I guess he’s too lazy to fly. 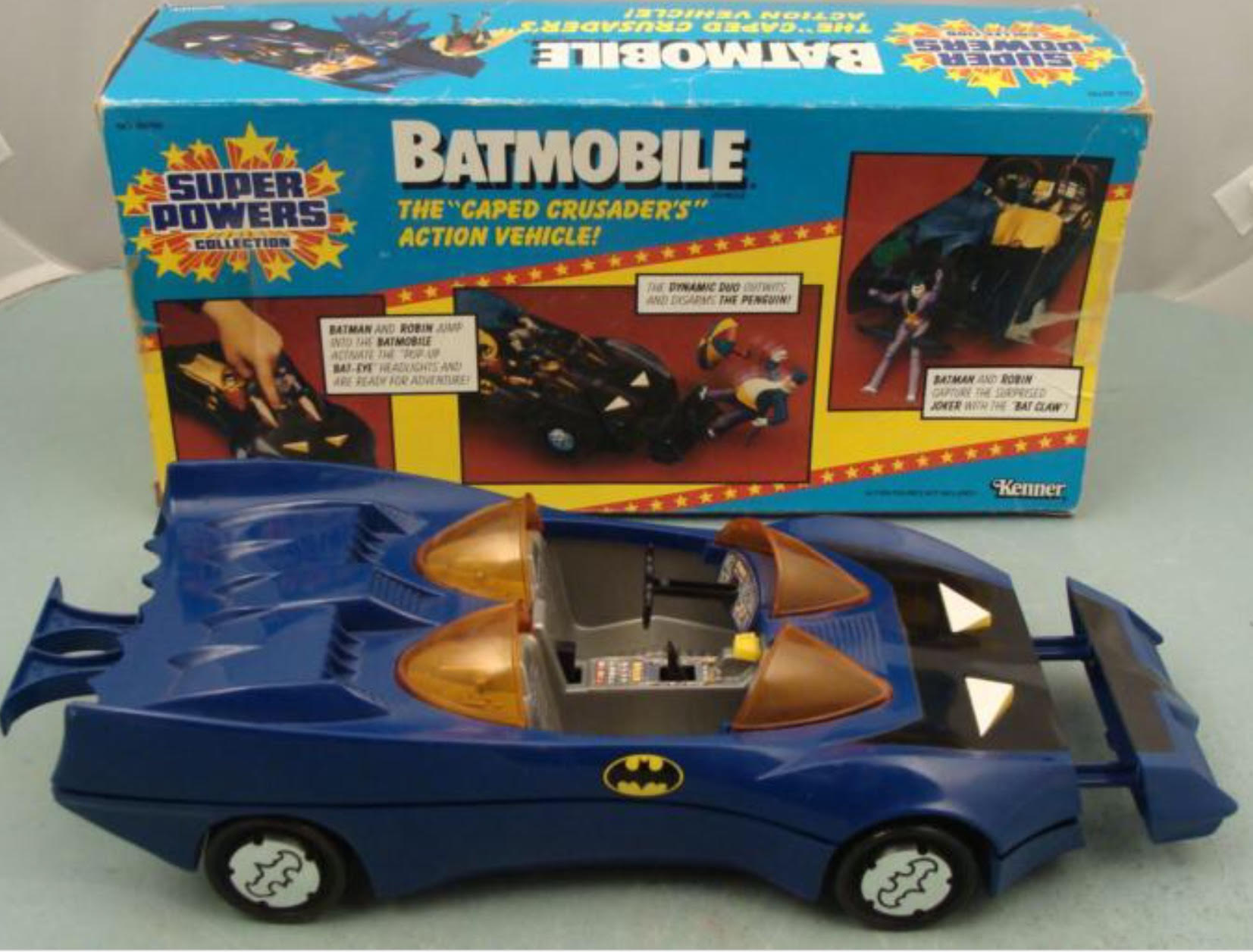 There was one playset made the Hall of Justice

. A second playset was advertised on the back of the wave 3 cards Darkseid’s Tower but was never made before the toy line was canceled.

I hope you enjoyed the write up, a trip down memory lane or some new info depending on your age. Next week we will be covering the Megos and all their importance. If you happen to see any unopened DC Super Powers at your local comic shops I’d suggest buying em up, if they are priced right. It’s one of the hottest vintage toy sets today on eBay and with all vintage unopened toys quantities are very limited. Thanks for ready and until next time happy hunting.