Each week, hundreds of new comics hit the stands, each with potential. Some live up to that potential. We pick the ones we think have the best shot at heating up. Here are our picks of the week:

Returning Favorites
DCeased #3 – the series has been pretty cool. I am switching of the horror movie covers this week because of the higher price, but still worth the grab and a good read.

– one of the last killer B covers before the higher priced card stock covers kick in. Great looking cover as always and has a very retro feel to it.

Test #1 Transmet Homage – A non DC Killer B. Homage to Transmetropolitan, one of my favorite books of all times which is reason enough for me to pick it up.

The DC One to Watch
Deathstroke #45 – brings us a new Deathstroke in the wake of the death o Slade Wilson.

that is pretty sweet. There is also a ratio variant by Mirka Andolfo variant (the artist on Unnatural)

The Marvel Must Haves
Immortal Hulk #20 – is always a must pick up. Harpy picked Hulk clean and ate his heart last issue so will have to see where this issue is going.

Savage Avengers #3 – features Conan with the Venom-blade will it appear in the comic and is it related to the one featured in War of the Realms, and if so, how did Conan get it. The Simone Bianchi Variant Cover could be worth the pick up.

The Reprints Worth Grabbing
New Mutants #98 Facsimile Edition – the latest in the series of marvel reprints reprinting the exact copy of the original comic, ads and all. Not the first time it has been reprinted but in this format it is still one worth picking up.

True Believers Absolute Carnage She-Venom #1 – reprints the first appearance of She Venom as seen in the Venom movie. This has been a hot issue so $1 may not be a bad grab.

New #1’s
Sea Of Stars #1 – Jason Aaron’s new book from Image. Aaron books are always a great pick up and this one has a Mike Mignola cover

The No Brainer
Space Bandits #1 – Mark Millar’s new series which will surely be picked up by Netflix soon. There is a Howard Chaykin variant cover worth looking at.

– I love Amigo comics and this new action thriller looks cool. Will have a small print run and could be hard to find. 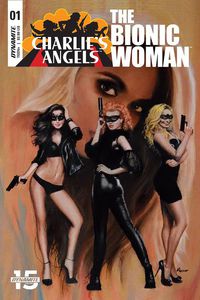 Cover of the Week
Charlies Angels vs The Bionic Woman #1 Ron Lesser Cover – my favorite cover of the week, as a kid growing up in the 70’s and 80’s these were my favorite women and this is just a great looking cover.

The Pick of the Week
Walking Dead #193 – The final issue. We spoiled this last night. Nuff said.