Image Comics released the following press release on what they’re calling the final additional printings for all 5 issues of the new hit series Stray Dogs. 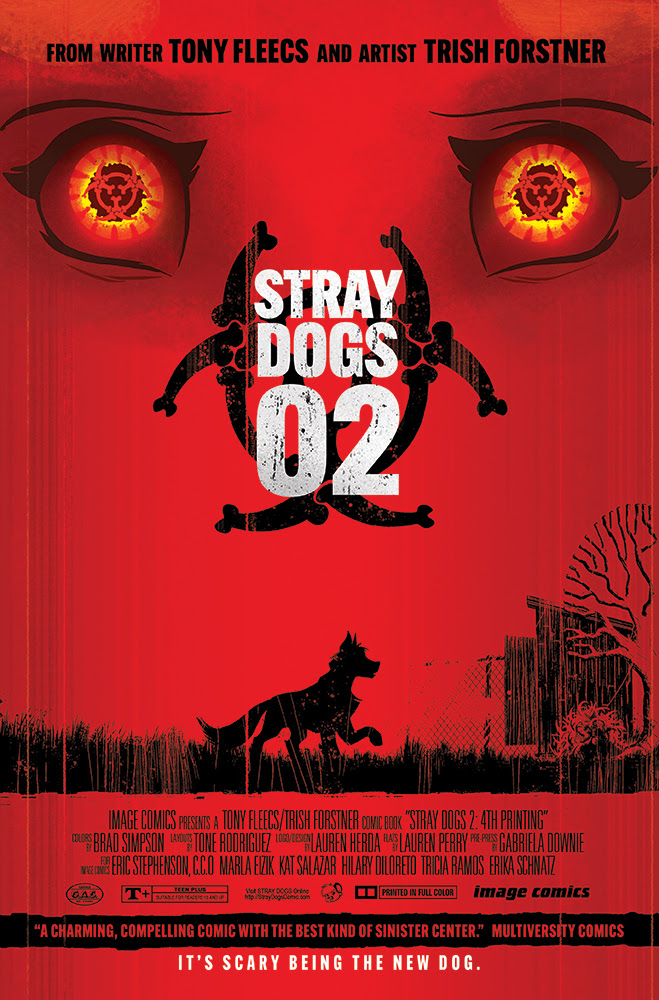 popular Stray Dogs by Tony Fleecs and Trish Forstner will be rushed back to print—for the final time—to alleviate the untamed reorder activity on the series.

In this suspenseful miniseries, readers meet Sophie, a dog who can’t remember what happened. She doesn’t know how she ended up in this house. She doesn’t recognize any of these other dogs. She knows something terrible happened, but she just…can’t…recall…Wait! Where’s her lady? Now Sophie has to figure out where she is, what’s happening, and how she’s going to survive this. They say there’s no such thing as a bad dog—just bad owners.

Stray Dogs is a five issue, Don Bluth-style mystery/horror miniseries best described as Lady and the Tramp meets Silence of the Lambs.

The Stray Dogs #1-5 final reprints will be available at comic book shops on Wednesday, August 4:

Stray Dogs is also available for purchase across many digital platforms, including Amazon Kindle, Apple Books, comiXology, and Google Play.

There will also be a FCBD edition of Stray Dogs available on August 14, at participating comic shops, which will feature a brand new prologue, “That Doggie in the Window”—the unnerving story of the very first dog to ever come to the Master’s house.

“What do you get when you crossbreed Silence of the Lambs with All Dogs Go to Heaven? Well, you get Stray Dogs.” —Forbes

“It’s not something that comes around every day, and if you enjoy trying new twists on classic comics premises, this should be at the top of your list.” —ComicBook.com

“Stray Dogs manages to somehow be a convincing collision between 101 Dalmations and Criminal. Noir, charming and a really great take on quasi-real dog psychology.” —Kieron Gillen

“A charming, compelling comic with the best kind of sinister center.” —Multiversity Comics

“May catch your eye with its Disney-like style, but it will grab you with a riveting and shocking story that will keep you coming back for more.” —Horror DNA