New #1’s
Tales From Harrow County Fair Folk #1 – New Harrow County. I love Harrow County. Long ago optioned but that doesn’t even matter, this has been a fave here for a while. Fresh off the loss of her goblin friend to a strange portal, Bernice must weigh her responsibilities as protector of Harrow County with her desire to get her companion back safe and sound. But the past weighs heavily and the fair folk use Bernice’s and her memories against her. And something more disastrous than she could have feared may be around the corner to threaten both the worlds of humans and of haints.

Blue & Gold #1 – New Booster Gold and Blue Beetle series. Desperate to regain the spotlight, Booster Gold looks to attract the public’s (and Justice League’s) attention the same way any washed-up, second-rate hero would—social media. The not-so-tech-savvy hero from the 25th century enlists the help of his best friend, Blue Beetle, who possesses both the money and the brains to help his old pal navigate the scary world of internet influencers. Watch out, evildoers, our heroes are live and online!

Superman And The Authority #1 – Sometimes even Superman finds a task almost impossible. Sometimes even the Last Son of Krypton needs to enlist help. Some tasks require methods and heroes that don’t scream Justice League. So Clark Kent, the Metropolis Marvel, seeks out Manchester Black, the most dastardly of rogues, to form an all-new Authority tasked with taking care of some business on the sly. Not only will Black know the right candidates for the team, but if Superman can make him behave himself and act in service of the greater good, then he’ll prove literally anyone can be a hero! They’ll have to move quickly, however, as the Ultra-Humanite forms his own team to take out the Man of Steel. This new limited series helps launch an all-new Superman status quo, setting up story elements that reverberate across both Action Comics and Superman: Son of Kal-El in the months to come. And not only is Superman putting together a superstar team, but it takes superstars to tell the tale: Grant Morrison

Bermuda #1 – New IDW from John Layman (Chew). There’s a region in the Atlantic Ocean where planes disappear, ships are lost, and traveling souls go missing… never to be heard from again. And there’s an island within this place, mysterious and uncharted, untouched by time and civilization, where all who are lost end up-human or other! Bermuda lives here. She’s 16, scrappy, and living on this insane and wondrous jungle island-fighting at every turn to survive-is the only life she has ever known. She can handle the dinosaurs, the pirates, the crazed soldiers, dark magicians, and strange monsters. But the weird new kid who washes ashore just may be the biggest challenge Bermuda has ever faced-as he drags her along on a perilous rescue mission she wants no part of and he’s likely to be the death of both of them!

Syphon #1 – New Top Cow Noir Fantasy about an EMT who can syphon off the pain of others. But while he is helping others, he is cursing himself to live with their pain. And, throw in the fact it is attracting sinister forces, and it sounds pretty interesting

Trailer Park Boys Get A F***ing Comic Book #1 – Cult Canadian TV show gets a comic book crossover. Could be worth it. High priced first issue, could be hard to get ahold of.

Notable Reprints
White (Black Mask Comics) #1 2nd Ptg – First print already doing well thanks to the very limited release. Second print will have a higher print run, however, still may be worth grabbing a copy, and see if the hype continues. Might also be worth trying to pre-order later issues as they all are limited to 2,500 copies. Issue 4 and Issue 5 are still showing for pre-orders on TFAW.

The Over-Hyped One
Marvel Action Spider-Man #4 – some heat on this book due to some Youtube videos saying there is a new character, however, this is Screwball, who first appears in Amazing Spider-man #559 anyway, the 1:10 variant is seeing some success at over 2x ratio, but they are being listed as a first appearance. Again, yeah technically it is, but the first IDW Action Universe appearance of a character that already appeared in the regular Marvel U.

Small Press Pick of the Week
Dark Blood #1 – We told you the other night that this was sold out and going to a second printing before release. Pretty good considering it is a new book, but it is a Boom Studios book which puts it on people’s radars. Nothing crazy on eBay sales at the moment, but people could scramble if copies get wiped out.

Pick of the Week 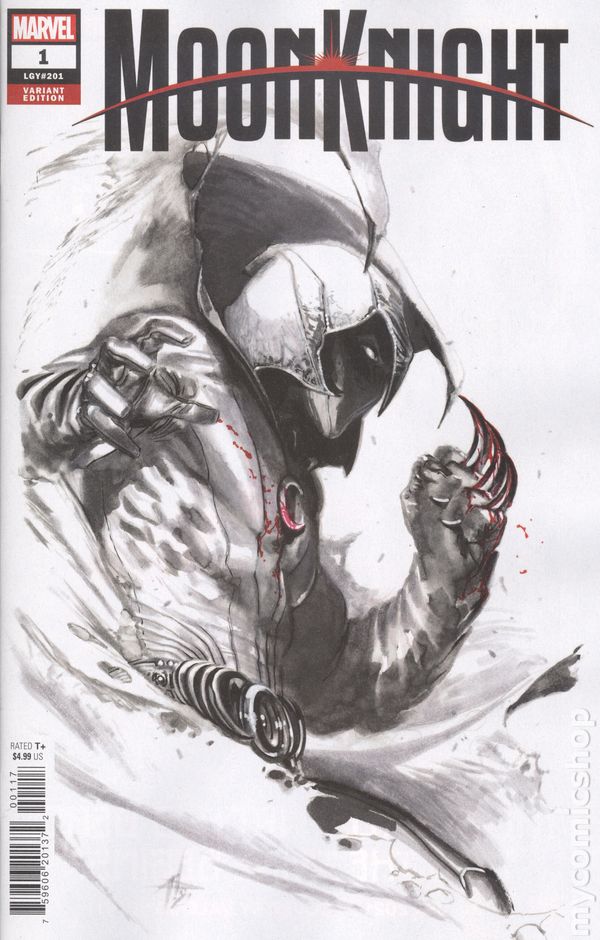 Moon Knight #1 – Moon Knight is white hot right now. All his back issues are doing pretty well. New series with no threats. Speaking of which Hunter’s Moon seems to be on the cover of Issue 3 but expect him to make a cameo in this issue or Issue 2. Also, the Dell Otto cover is sick.