New #1’s
Batman Beyond Neo-Year #1 – Neo-Gotham is alive and has killed Bruce Wayne. It’s rejected Terry McGinnis as Batman and offered him the chance to escape. Terry turned it down—he is the city’s protector, and he will uphold the legacy of Batman. Now Neo-Gotham will do everything in its power to destroy Terry, including creating brand-new villains to fight him. Terry’s first year without Bruce Wayne begins…does he have a fighting chance?

Earth-Prime #1 Batwoman – Spinning out of the hit CW shows, Earth-Prime continues the adventures of your favorite heroes from the small screen. While each issue focuses on a different Arrowverse series, a threat lurks in the background, out to finally bring these heroes to their knees! Ever since the tech that created many of Batman’s rogues hit the streets, Ryan Wilder has been running herself ragged trying to contain the new villains popping up around Gotham City. But when Clayface’s mud binds itself to a local high schooler, Batwoman will need help from an unexpected source in order to contain this muddy foe! Also, follow how Luke Fox balances his life as a superhero and a boyfriend!

Lego Ninjago Garmadon #1 – The All-New LEGO NINJAGO Comic Book Series Starts HERE! Perfect for fans new and old alike, an official new chapter of the LEGO NINJAGO universe begins here! Far away from Ninjago City, a village is terrorized by a mysterious new threat when they’re saved by a stranger with incredible powers known as Garmadon, Lord of Destruction?! Has Garmadon turned over a new leaf since his disappearance, or is this just the first step in his master plan of finally defeating Master Wu and the ninja forever? The first collaboration between the LEGO Group and Skybound

Project Superpowers Fractured States #1 – As the nation is torn apart, someone is murdering all the patriotic heroes. A mysterious amnesiac awakens in a sealed underground base, naked and abandoned. This John Doe emerges to the year 2052, where the entire Project Superpowers Universe has been turned on its head. The United States is no more, ravaged by environmental disaster, and fragmented into warring regions. The Black Terror is now many – revolutionaries trying to save the republic. But who IS John Doe? Why can’t he remember anything? And does his presence in this brave new world bring its salvation…or its doom?

STRGRL #1 – Higher priced indy book, may be passed over by a ton of shops. Enter the world of STRGRL, created by the award-winning artist Lucas Mendonça. The cosmic organization known as STRGRL no longer exists. As enemy forces continue to threaten the integrity of the galaxy as a whole, a group known as the Moon Gang, formed by 4 general stargirls from the moons of Jupiter intercepts the enemy.

West Of Sundown #1 -A beautiful vampire must flee monster slayers in New York City and reclaim the ancestral soil that restores her undead flesh. But the world has changed since she was reborn in the New Mexico desert, and now Constance der Abend and her loyal assistant Dooley must adapt to life in the rough frontier town of Sangre de Moro, where all sorts of monsters have settled. A western tale of survival starring a cast of literary horrors from the diabolical mind of Tim Seeley

Spectacular Spider-Man #1 Facsimile Edition – First appearance of the Tarantula gets done again exactly as originally, ads and all.

Flashpoint Batman Knight Of Vengeance #1 (One Shot) – Sold out at Midtown. Wayne Casinos towers over Gotham City, but even the bright lights can’t keep the dark shadows from enveloping the city. When the Joker kidnaps the children of the city’s District Attorney, the Batman takes the case. But the man under the mask may not be the Dark Knight we know! Flashpoint: Batman Knight of Vengeance is an all-in-one reprint of the 2011 three-issue series in periodical format, and is timed with the release of Flashpoint Beyond #0, telling Flashpoint Batman’s origin story. 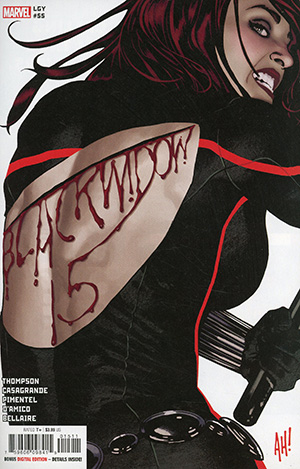 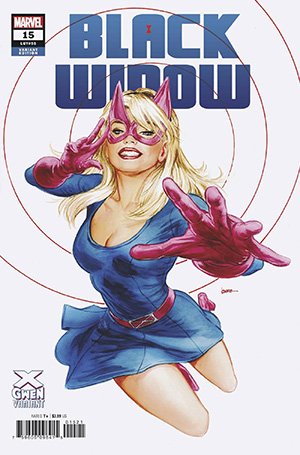 Double does of hot covers for this book, the regular Black Widow #15 by Adam Hughes and loving the
Black Widow #15 Kaare Andrews X-Gwen Cover as well.

Small Press Gems
Ocean Will Take Us #1 – Really looking forward to this one. Something’s lurking in the waters of Almanzar Bay – and when Casey March tries out for the swim team, he learns firsthand that messing with the social order of his new high school can have dangerous – even deadly – consequences! From Bram Stoker-Award nominated writer Rich Douek (Sea of Sorrows, Road of Bones) and artist Carlos Olivares, comes a new tale of horror and intrigue – where a group of high school outcasts band together to fight a growing evil in their school and town.

Fist Of The Dragon #1 – 1970’s style Martial arts comic. Loved the cheesiness of the movies, this one is for you.

Small Press Pick of the Week
Alice Ever After #1 – Boom studios has a production deal, so all Boom #1’s are pick ups for me. Return to Wonderland in this twisted sequel by superstar artist and writer Dan Panosian (An Unkindness of Ravens, Canary) perfect for fans of Mirka Andolfo’s Mercy and Luna. Alice first visited Wonderland as a child. Now an adult, it’s her only escape from a cold, strange reality she finds herself living in. But in order to return to her fantasy world, she’ll need something stronger than mushrooms that change her size, and is forced to resort to crime to feed her growing addiction. Will Alice choose to escape from her uncaring family and childhood trauma in Wonderland, or find the courage to face her demons in the real world?

Pick of the Week
Spider-Punk #1 – Hobie Brown, aka Spider-Punk, takes center stage in his own series. Set to protect EARTH-138 (Misfits fans will recognize that reference) with his ax in hand and his chaotic band of punk rockin’ heroes backing him!  NORMAN OSBORN is dead, but will the chaos he’s created be too much for Spider-Punk and gang to handle?