Hello Wednesday Warriors, another less then stellar new week, but a couple of books worth noting. Here is what is on tap.

New #1’s
Do A Powerbomb #1 – new Daniel Warren Johnson series. Lona Steelrose wants to be a pro wrestler, but she’s living under the shadow of her mother, the best to ever do it. Everything changes when a wrestling-obsessed necromancer asks her to join the grandest pro wrestling tournament of all time, which is also the most dangerous! It’s The Wrestler meets Dragonball Z in a tale where the competitors get more than they ever bargained for!

Seven Sons #1 – Jae Lee returns to creator-owned comics with his first new title since 1994, a seven-issue limited series. SEVEN SONS is The Fugitive meets the Book of Revelation. Delph, a young man who may be the Second Coming of Christ, runs for his life as he attempts to learn the truth behind his existence.

Bill & Ted Roll The Dice #1 – The time-traveling duo are back in a monthly series of most excellent adventures! Go to Hell with Bill and Ted as they must save their souls with saving rolls! Old friend Joan of Arc, Aleister Crowley, Niccolò Paganini, and… Doctor Feelgood round out the party taking on the Game Master… Satan, himself! Plus, the ‘Secret Origin of Chuck De Nomolos’!

Endangered #1 – My friends over at Blood Moon Comics have a new Sci-FI survival horror series out. Humanity has become an endangered species following a nuclear war. The survival of our species rests with a group of scientists aboard a low-orbiting space station. Their solution to stabilizing their uninhabitable home has unknowingly facilitated the evolution of the insects that survived the fallout. Now the time has come for mankind to return home, but their fight for survival is just beginning. 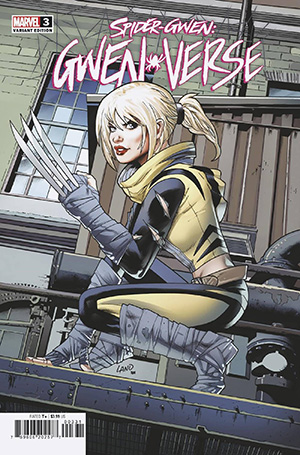 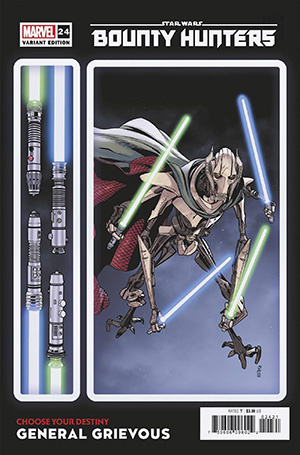 Spider-Gwen Gwenverse #3 Greg Land Homage – Love this cover. I have been grabbing the Homage covers for fun and to put together a nice little set. This one features Gwen-verine on it.

Star Wars Bounty Hunters #24 Chris Sprouse Choose Your Destiny Cover – I just like these. Moving away from the 50th Anniversary towards these.

One to Watch
Spider-Man 2099 Exodus #2 – a new Loki 2099 appears. There was one previous in the old X-Men 2099 series who later became a much cooler character named Halloween Jack. Interested to see if this is Jordan Boone, the first Loki 2099 or not. Anyway, Loki 2099 (2) makes an appearance.

Notable Reprints
Grim #1 3rd Ptg – And it begins again with the reprints going for crazy money. Already selling for $35

Pick of the Week
A Calculated Man #1 – This is kind of a no-brainer pick up of at least one copy. Hulu picked this one up before the release of the book. Aftershock made the announcement pre-FOC, so don’t go nuts.

Join or start the discussion over on the forums!