New #1’s
DC Mech #1 – At the end of World War II, Earth was invaded by giant mechanized parademons from a planet called Apokolips. Earth’s protectors, the Justice Society of America, were devastated, and with them, the age of superheroes came to an end and the era of the Mech began. In the ensuing years, the world has stockpiled colossal battle suits piloted by elite warriors, waiting for the day Apokolips returns. But when Kal-El, the last son of a dying world, crash-lands in Metropolis with his own war suit, he’ll face down two of Earth’s finest Mech fighters, the Flash and Batman. The dawn of a brave new mechanized DCU is here

Gambit #1 – All-NEW ADVENTURES OF THE LEGENDARY THIEF BY CO-CREATOR CHRIS CLAREMONT! You think you know all there is to know about Remy LeBeau, the Ragin’ Cajun, the mutant known as GAMBIT – but legendary X-scribe Chris Claremont has an ace up his sleeve with this new series! Before he joined the X-MEN, Gambit encountered a mysterious girl named ‘RO – the mutant STORM regressed to her child self by the nefarious NANNY – and the two went up against the forces of the SHADOW KING! Now, revealed for the first time, Gambit finds his path to becoming the heroic X-Man millions of fans call their favorite! Joined by rising star artist Sid Kotian, Chris weaves a story of action, intrigue and revenge that made Gambit the mutant he is and forged his relationship with Storm.

Genis-Vell Captain Marvel #1 – PETER DAVID RETURNS TO GENIS-VELL, SON OF THE ORIGINAL CAPTAIN MARVEL! Both now back in the land of the living, Genis-Vell and Rick Jones are about to come crashing back into each other! Witness Genis-Vell, Captain Marvel return to the pages of his very own series written by legendary scribe Peter David, drawn by artist Juanan Ramírez! Can Rick Jones save Genis – and himself – before they both fade out of existence?

Macabre Motel #1 – welcome to The Macabre Motel, a Twilight Zone-inspired weird horror story that will leave you feeling deeply unsettled long after the final page! Anxious about meeting his girlfriend’s family, Steve decides to rest his eyes at the only motel around. But once inside, the bizarre cast of characters leaves him shaken, terrified and questioning his very sanity! Are you ready to enter… The Macabre Motel?

Ninja Kaidan #1 – Cool looking new series from Blackbox ComicsNot even a lifetime of martial arts training and years as an elite soldier could prepare Yuki Snow for this newest challenge: CEO of his deceased father’s company. Suddenly thrust into a leadership role at YOKAI Consolidated, Yuki finds himself taking over his father’s pet project, the mysterious Kaidan armor, which would allow its wearer to see, speak to, and touch ghosts.

Superman Space Age #1 – Meet Clark Kent, a young reporter who just learned that the world will soon come to an end (Crisis on Infinite Earths) and there is nothing he can do to save it. Sounds like a job for his alter ego…Superman! After years of standing idle, the young man from Krypton defies the wishes of his fathers to come out to the world as the first superhero of the Space Age. As each decade passes and each new danger emerges, he wonders if this is the one that will kill him and everyone he loves. Superman realizes that even good intentions are not without their backlash as the world around him transforms into a place as determined to destroy itself as he is to save it

Notable Reprints
PS Artbook Scream Magazine #1 – One of my favorite horror magazines and covers gets reprinted. I own an original but still may pick this one up to re-read.

One and Done
Hollows #1 (One-Shot) – Sam Keith!! An all-new series from the creator of The Maxx and the co-creator of Zombies vs Robots! Sam Kieth and Chris Ryall transport you to a near-future Japan, where burned-out husks-the Hollows-wantonly devour souls throughout the city. Far above, a segment of society lives safely in giant tree-cities, but the problems below have a way of growing out of control..

Anniversary Issues
Amazing Spider-Man #6 – 900th issue of ASM. omeone from Spider-Man’s past has captured the Sinister Six and used them to create the truly terrifying SINISTER ADAPTOID! This is one of the biggest adventures in Spider-History and you will not believe the ending! 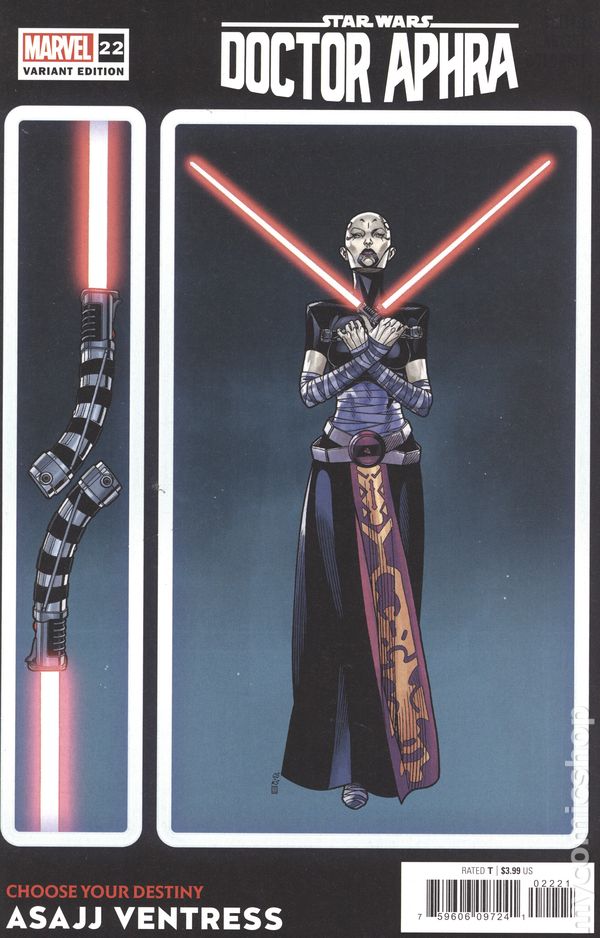 Star Wars Doctor Aphra #22 Choose Your Destiny Cover – I said it before, I am not going down the rabbit hole with these covers, but some are way more interesting than others, like this one, featuring Asajj Ventress.

Small Press Pick of the Week
Cradle Of Filth #1 – In the ruined halls of the Maledictus Athenaeum lie occult histories, sealed records, and cursed artifacts-this unholy archive explores the far corners of Cradle of Filth’s musical legacy, a vast universe of Ageless Vampires, Mythical Creatures and Vengeful Gods. Within this hidden vault, we revisit The Succubus and Nemesis in stories from an all-star roster of comics talent.

Sulfur Wells #1 – Blood Moon Comics. Around the rim of a large man-made lake resides a rural community. The lake has provided the community with commerce and recreation but it has also taken. While two young friends navigate the waterways and the complications of southern poverty they also must remain vigilant of an elusive local cryptid species.

Pick of the Week
Ant-Man #1 – New Ant-Man apparently appears. May be a great pick up.