by Alan Murphy
There has been a sense of cohesion throughout DC during it’s event, Dark Nights: Metal with a tighter focus than normally expected. The main title of the event is self contained and does not leak out too much into other DC titles, but if the reader wants to delve further into the dark, twisted world of the dark multiverse, or how it is affecting the other heroes dealing with the corrupted, twisted Batman’s, then the stand alone tie ins offer great insight.
For tie-ins for events, they have to tread the fine line of a cohesive, full story that can stand apart from the main series on its own merits and still connect to the main series enough that it feels part of the greater whole. To walk the tightrope of relevance and content that matters is a tough act to perform, but the series of tie-ins, each named after a different Dark Multiverse Batman , that deals with the rise of said Batmen has been consistently entertaining; offering affecting stories about Batmans who let the worst side of themselves –paranoia and a soloist attitude towards the act of saving of the world- get the better of them, with tragic and disastrous results. 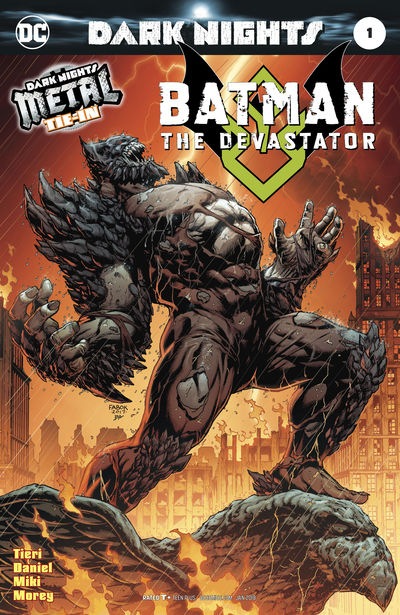 Batman: The Devastator, written by Frank Terri with art by Tony Salvador Daniel, is the sixth book in the Dark Nights: Metal one shots; it tells the story of a Batman whose mistrust of Superman corrupts him into a monster incapable of trust and humanity – a hideous combination of Doomsday DNA and Bruces, named the Devastator. Its story is effective, jumping between a present battle between Lobo and the Devastator near the Fortress of solitude, an attack on Lois Kent in Metropolis, and the tragic tale of the corruption of that worlds Batman.
There is a dose of tragedy and pathos to this worlds Batman and his goals, he blames himself for letting Clark get this far, as he wonders “was it a solar storm that altered his mind? Was it Darkseid or Mr Mind, or a new kind of kryptonite Luthor had developed?”
There is a theme with each Metal tie in that is hard to be missed, each story follows a similar path, Batman has to do the unthinkable on a dark earth, which corrupts him to the point of no redemption, this issue is no different. Not saying this as a negative, each story has a similar structure but each has unique draws, seeing how Batman can turn for each hero is interesting in its own right.
Daniel’s art is at its usual greatness, with beautiful action scenes drawn equally bombastic and detailed. The page of Superman gone bad is formidable, and his version of the Devastator is a hulking monstrosity, showing us the parallels of the two men gone awry. More intimate character moments are also part of the story, as Lois struggles to keep Jon safe from a virus affecting Metropolis.
Batman sacrificing everything for the greater good is not a new idea in comic – and seeing him take down Superman is a cliché in itself- but it is interesting how much each writer has gotten out of these mini elseworld comics. The tie-ins continue to be interesting and add some background details to cool characters that needed more detail than badass metal designs. So far it’s been a relative success, each broken Batman is a formidable enemy unto itself, and to see them unite under the Batman who laughs is a frightening prospect. Six down, one to go.
Overall: 7.5/10

One thought on “Review: Dark Nights Metal Batman: The Devastator”