Indie books are great. They’re great to read and it allows the creators to really express themselves as both writer and artist.

So I’m going to dive into some of the upcoming Indie books hitting the store shelves soon right out of the March Previews. Five Years weaves the many strands of the ‘Terryverse’ into one epic saga, years in the making!

A dangerous paper written by Lilith has been leaked to the nations of the world containing a formula for the ultimate weapon, and now labs around the globe are attempting to build and test the Phi Bomb. Tambi, in an all-out effort to find the labs and stop them, has enlisted the help of Ivy Raven, Julie Martin, Rachel and Zoe. Meanwhile, Katchoo and Francine have moved their household – including the kid’s new bodyguard, Samantha Locklear – to the beach where Katchoo devises her own solution to the problem… 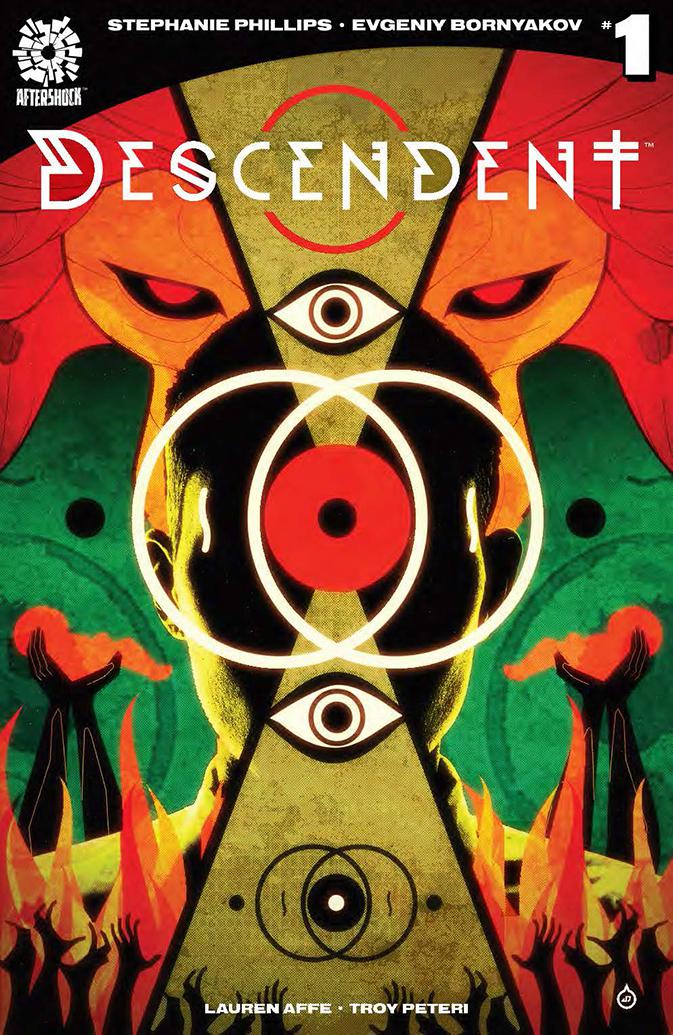 WANTED: Information as to the whereabouts of JACKSON E. MILLER, Son of Senator Carter Miller. The child was kidnapped from his home in Washington, DC between 4 and 6 a.m. on Tuesday, March 1, 2018. Address all communications to FBI representative Joanna Hernandez, writer Stephanie Phillips (Devil Within, Kicking Ice), artist Evgeny Bornyakov, colorist TBD, or letterer Troy Peteri.

All communications will be treated in confidence. Please, no more calls about secret government conspiracies or ancient cults. Conspiracy theories, government corruption, and a really good mix of Prince drives David Corey to help solve the mysterious disappearance of a famous politician’s son. When David realizes that the truth is much more dangerous than a kidnapping, he must battle ancient secrets that have endangered the lives of children for centuries. This conspiracy-fueled adventure story looks at the darker side of American history through the eyes of an unlikely team of heroes. If they fail, the American government and……

I love a good crime drama with some conspiracy theory stuff mixed in. Earth’s entire population has become infected with an airborne virus, but only one percent have the specific gene required to activate it. These individuals begin to develop unusual abilities due to the rare gene.

In most cases these abilities are harmless, but in a few isolated cases they become extremely dangerous. Because of this threat, all One Percenters are forced into isolated facilities for further testing.

Under the guise of being a research company searching for a cure, Sanaxus carries out barbaric tests on One Percenters with their own secret agenda in mind – until a cataclysmic event at a minimum security camp involving One Percenter Lenard Higgs, a former college professor, triggers the start of a war between the government and the One Percenters.

Sounds like a twist on a real world X-Men type scenario. Could be a good read if done right. In the spirit of Astroboy, Gigantor and Giant Robo comes retro 1960’s manga action for the new age!

Kip Fenwick is a secret operative fighting against a nefarious organization bent on world domination.

When Kip’s essence is transferred into the body of a giant robot, it’s a now up to Ultrabot Go Go Go! to take on the fantastic enemies of the world in the most action-packed one-shot you’ve ever read!

The only thing Ultrabot has going against it is that it’s a one-shot that could kill the longterm spec potential. But I don’t think this one is for everyone, it’s going to attract those who are into Manga as well. The Headtaker, feared executioner and wielder of the legendary Wailing Blade, kills every man who meets his gaze. And, right now, he’s looking at Tychon, an upstart bandit prince fighting to save his father from the chopping block. An oversized first issue with so much skull-splitting action, you’re guaranteed to lose your head over it!

I really like this the solicitation of this book. My only fear is it might take ComixTribe 2 years to release all 4 issues in the series. Kevin Eastman (TMNT) returns to independent comics with a new creation: an inside look at the turbulent life and times of a once-successful cartoonist on the skids, Shane ‘Books’ Bookman. Once upon a time, Books co-created The Radically Rearranged Ronin Ragdolls: a gritty, funny indie comic that became a billion dollar global franchise. Now, years later, the partnership dissolved, the corporate buy-out all spent, Books is struggling to recover from the hit-and-run driver called early success… and looking for the will and the joy to create something new again. Co-created by Kevin Eastman and David Avallone (Elvira, Bettie Page).

Kevin Eastman doing indie books again, could be good and one I’m looking forward to reading which comes to the next book that’s tied into this series, a one-shot with some great looking covers that depict his original TMNT original books. From the pages of Drawing Blood and the mind of Kevin Eastman comes the story-inside-the-story: the indie comic about three crime-fighting mutant cats which launched the Ragdolls franchise in 1992, and kicked off Ragdolls-mania!

See where it all began, in this thrilling one-shot from co-creators Kevin Eastman (Teenage Mutant Ninja Turtles) and David Avallone (Elvira, Bettie Page). Did you ever wonder what happens when copyrights run out? In this case, it means irreverent cartoonist, Tim Fuller, can take public domain funny books from the 40s and 50s and rewrite them with hilarious results. New stories for you, the hip, cynical reader. (You know who you are.)

This issue features a malfunctioning robot out to destroy the human race, a cryptic warning from beyond the grave, a flatulent super duo battles a shady psychic, a lonely astronaut looking for lovin’, a time traveler trapped on a strange planet, and more!

Picked only because it looks like a possible fun read.