Head over to Amazon on July 15-16 and get some killer deals on select Image books for Prime Day. Some of their hottest titles, including Saga, The Walking Dead, and Invincible, will have super steep discounts, so grab some books for yourself, some friends, and some strangers. Check out the list below for specific times!

Collecting the epic second storyline of the smash hit series Entertainment Weekly called “the kind of comic you get when truly talented superstar creators are given the freedom to produce their dream comic.”

The Eisner, Harvey, and Hugo Award-winning phenomenon continues, as new parents Marko and Alana travel to an alien world to visit their hero, while the family’s pursuers finally close in on their targets.

Visit new planets, meet new adversaries and explore a very new direction, as Hazel becomes a toddler while her family struggles to stay on their feet.

After a dramatic time jump, the three-time Eisner Award winner for Best Continuing Series continues to evolve, as Hazel begins the most exciting adventure of her life: kindergarten.

Finally reunited with her ever-expanding family, Hazel travels to a war-torn comet that Wreath and Landfall have been battling over for ages. New friendships are forged and others are lost forever in this action-packed volume about families, combat, and the refugee experience.

After the traumatic events of the War for Phang, Hazel, her parents, and their surviving companions embark on a life-changing adventure at the westernmost edge of the universe.

Get ready for the most shocking, most impactful SAGA storyline yet, an action-packed adventure about fake news and genuine terror.

Collecting the first 18 issues of the smash-hit series, this massive edition features a striking new cover, as well as special extras, including never-before-seen sketches, script pages, and a roundtable discussion with the creators about how SAGA is really made.

Collecting 18 issues of the award-winning comic, this massive edition features a striking original cover from Fiona Staples, as well as a brand-new gallery of exclusive, never-before-seen SAGA artwork from legendary creators.

In the early hours after Halloween of 1988, four 12-year-old newspaper delivery girls uncover the most important story of all time. Suburban drama and otherworldly mysteries collide in this smashhit series about nostalgia, first jobs, and the last days of childhood.

This gorgeous oversized deluxe hardcover is the perfect way to experience the first two storylines of the smash-hit series that The Chicago Tribune named one of the “Best Books of the Year.”

This gorgeous, oversized deluxe hardcover collects two complete time-traveling adventures—one that sends our four newspaper delivery girls from 1988 to the prehistoric past, and another to their own terrifying future. 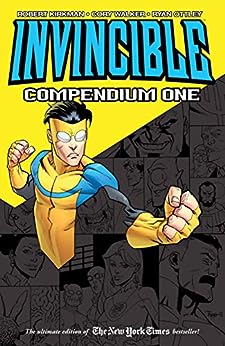 Introducing the first nine volumes of the greatest superhero comic in the universe, collected into one massive paperback edition!

Witness Invincible’s transition from new kid on the block to established superhero!

It’s here: the third massive paperback collection of the greatest comic in the universe. Witness the conclusion of Mark Grayson’s epic adventures.

Back in black by popular demand, this remastered edition of BLACK SCIENCE collects the first three arcs of the seminal pulp sci-fi smash hit.

A satirical fairytale adventure that smashes its cute little face against hilariously violent comedy that’s definitely NOT bedtime story material for the kiddies.

The Isles of Los Angeles 2089: Humanity is addicted to technology. Getting a virtual buzz is the only thing left to live for.

Millennia ago, mankind fled the Earth’s surface into the bottomless depths of the darkest oceans. Shielded from a merciless sun’s scorching radiation, the human race tried to stave off certain extinction by sending robotic probes far into the galaxy.

Scud is programmed to destroy a basement monster but he will self destruct if he does, so the robotic assassin puts the wounded creature on life support and becomes a freelance assassin to pay for the hospital bills.