It’s been a few weeks since the last Throwback Thursday. This round we go back 29 years ago to 1990 and visit a new X-Men debut.

This X-Men gained popularity pretty fast among X-Men readers and followers back in the day. I recall him being a big deal since everyone loved the thought he could create and transfer kinetic energy into anything he was holding but his weapon of choice was some poker playing cards. 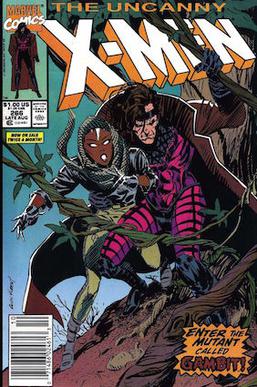 Yeah, now you know who I’m talking about and that’s Gambit, making his debut in X-Men #266

Okay so X-Men #266 was considered his first full and but he made a brief appearance also in Uncanny X-Men Annual #14 a month prior. The story in the Annual takes place after the story in X-Men #266 so go on and debate it if ya want.

Gambit on top of his primary power of creating energy and transferring to his playing cards or stick he uses also is very charming, which is a power within itself.

Gambit is Remy Etienne LeBeau from New Orleans. He was kidnapped from the hospital when he was born and raised by the LeBeau Clan Thieves’ Guild. He was referred as the “White Devil” within this group.

Both of these books are key books and now with Marvel taking over the rights of the X-Men in the movies, we’ll likely see Gambit properly done in the not so distant future hopefully.

That’s this weeks Throwback. How many of you readers were around when this was released?