It’s that time again, where I tell you what’s really grinding my gears for the week of August 28th, 2019.

This has me pumped. I will join Disney+ just to watch this show so I hope it’s done right and it’s good because Moon Knight can be a really great character with a whole lot of potential. Being a huge Moon Knight fan got me picking up key books for this character as I’ve been holding out but now’s the time to buy I think before prices start to increase. I’m buying for the personal collection.

I’m just going to go over some of the key books now that are a must for any Moon Knight fan.

is Moon Knights first appearance. Already pretty pricey if you want to get it in higher condition. Still in the affordable range for lower grades. If the show is successful, these will only continue to go up in price.

Perhaps most readers back in the day didn’t care so much and most turned into reader copies as it doesn’t seem to have nearly as many listed or nearly in higher grades available. It’s another great book to grab if you can find it at the right price.

Both of these have 30 cent variants that are even harder to find.

Moon Knight finally gets his own self title in 1980 under the name Moon Knight #1 which is a great book to own, still affordable and I think most will seek this one out upon this news from Disney.

This series has a few more key books in the first volume which include Moon Knight #12 (first Morpheus and Det. Flint), Moon Knight #15 (which is just an awesome Frank Miller cover) and Moon Knight #25 (first Black Spectre).

Other key books I think are worthy in mentioning is Defenders #47, which brings Moon Knight out from the one off stories and into the main Marvel Universe of characters and stories. His appearances in Defenders went from #47 to #51.

Marvel Preview #21 was a Black and White preview magazine that pre-dates Moon Knights first solo series Moon Knight #1 in 1980. Try and find this one in minty condition as it’s a must have book and can command some decent prices the higher up the grade ladder you go.

I could keep on going but I’ll stop there, don’t want this to turn into just Moon Knight. Maybe we need some pages created of main comic book characters with their key books.

Alright, this is a like and a dislike at the same time. I absolutely love the idea that Captain Marvel is going dark in the upcoming issue Captain Marvel #12.

The Yoon variant is pretty awesome. What I don’t like is the face cover on the Mark Brooks regular cover. Awesome new look but they should have just left the covering of the face off. 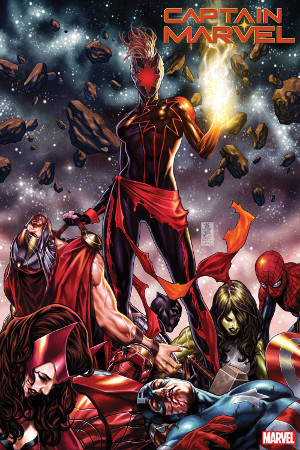 This makes me wonder what will happen with Star (Ripley Ryan) in this new series arc. Is she gone, does she play a pivotal role that isn’t being mentioned. She did get her own 2nd print cover so I’d imagine even if she’s not part of the new story arc, we haven’t seen the last of her.

Deaths in the Batman Universe seem to quite common but are also great flip comics. We all know the deaths never last long but you know, you can gripe and complain all you want but for me, these are great surprise flipper dream books.

Buy low, sell high, never turn back with any regrets. Batman #77 saw a death. Well, potential death, but all signs point to Alfred dying in the issue. Oh, did I just spoil it for you? I’m sorry, where have you been for the past week.

Anyways, with the death comes demand so now Batman #76 (you can still order the first print as well) and Batman #77 are getting second prints cause those who likely dropped this title are now going back to buy up the issues to read.

That’s what’s grinding my gears this week. What’s grinding yours? Whether it’s likes or dislikes, let us know here or in the forums.