Tucson Comic Con took place over the weekend of Nov 1st through the 3rd.  Quickly becoming my favorite off-season con, it’s a great size con for this time of year. Enough attendance that it feels like a big show but not so hectic that you don’t get time to have some great conversations with guests and fans.

It was a very well organized show with quick check ins and a friendly staff.  Security was fast but wouldn’t allow sealed water bottles in which makes me feel zero percent safer.  Minor inconvenience and you can’t blame the con organizers, thems the breaks since someone brought real weapons to a Phoenix con a few years ago.

TCC isn’t the place for a large celeb list, but otherwise there is something for everyone and it’s a great family event. Might be the weather, but everyone is seriously in a great mood.  There is a huge gaming room and a free play arcade. I appreciate being able to take an hour or two break to sit at a table and learn a new game and meet some people.  There was daily programming and a huge costume contest in the convention center’s nearby amphitheater.  For me the highlight was the very large artist alley, I like to discover new artists at shows like these and this year I met some awesome people: 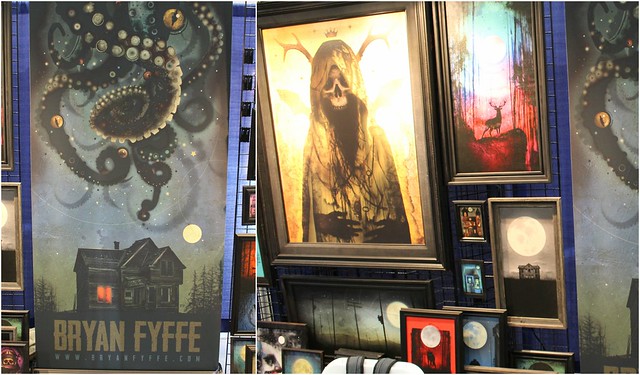 Bryan Fyffe had a large display of his gorgeously creepy artwork. He is humble and friendly, a nice contrast to his dark style.  I was happy to meet him and very interested to see his popularity grow over the next few years. (Anthony featured his work in a NYCC post last year).

Agile Pig is back on the scene after a few years away from cons.  I have several pieces of Ed Ouano’s work hanging in my daughter’s room. I highly recommend if you have little ones. On top of prints he makes storybooks, coloring books, and one of his books is free on Amazon Kindle Unlimited. 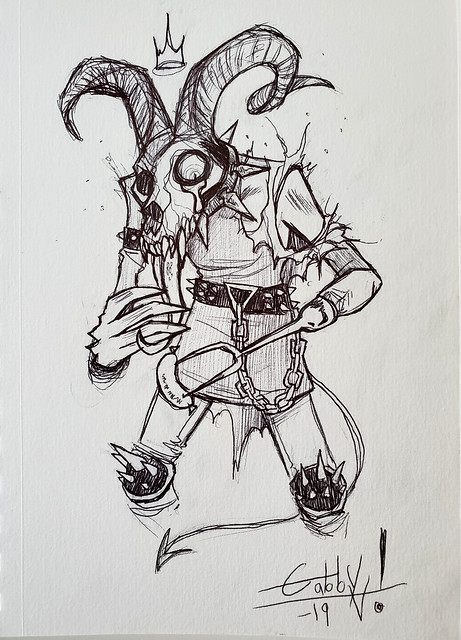 I got a few pages of original art in my sketchbook done at this con.  I gave my book to the very talented Gabby Vee and asked for a monster and she drew this Sausage Demon, hilarious and awesome!  Her work really resonates with me, there’s some dark stuff but a touch of humor mixed in. She had some of her own books available, they are very well illustrated.  I look forward to following her career and hope to see her at more cons. And hope to see her work on the LCS stands! I envision her illustrating a horror comic in the style of Hack/Slash. 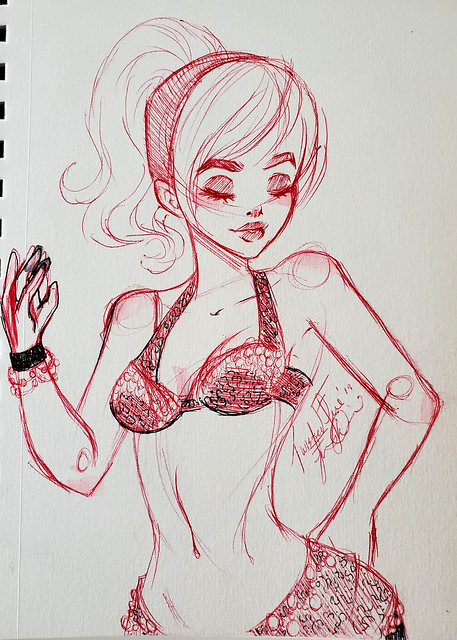 Next sketch is this belly dancer from Twisted Fae Art.  Sometimes I like to ask the artists to draw whatever they feel like, it always comes out better than anything I would have asked for.  Her art is vibrant and covers many genres. I can easily see her work on variant covers, and her cheery disposition makes her a pleasure to work with.  Another one to watch in the coming years!

Derek Riggs was there, fans love him and many vinyl records were signed.  He is happy to take a few mins to chat with everyone who approaches his table.  He has made some truly iconic images over the years.

Brian Pulido co-owns TCC so naturally there was a big Coffin Comics presence, both as a standalone booth plus several artists who routinely work with Coffin.  I’m always happy to report on Coffin Comics, it’s been remarkable watching how Brian has resurrected Chaos into at true independent powerhouse at Coffin.  And he’s not recycling the same idea, he has big plans to expand the Coffinverse with more twists and turns in the current Lady Death run plus a new “Untitled Extreme Horror Project” in the next year. I collect all the keys and first appearances from both Coffin and Chaos comics, given their current success, you never know what might be next.  Coffin’s current Kickstarter is a new installment to Hellwitch, it’s already surpassed the last Hellwitch Kickstarter plus the Parrillo Ultimate Legend Tier and Mystery Envelopes are all gone. Back it while you can! 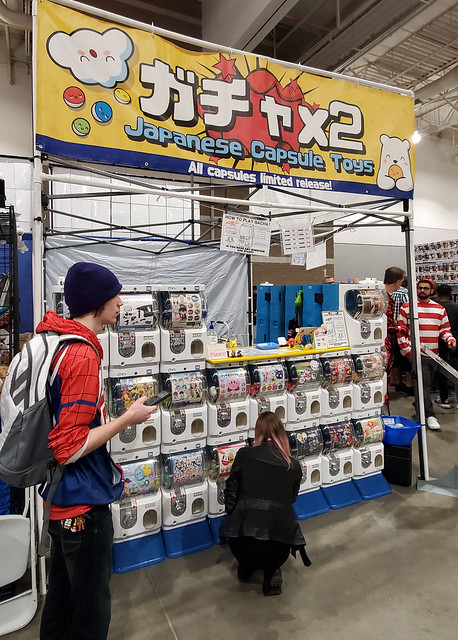 Here is something new, there was a booth filled with Gachapon machines which are small vending machines filled with Japanese capsule toys.  These are found in every corner of Japan and contains a wide variety of trinkets. Looks fun and addicting, this booth had visitors all weekend long.  I don’t know if it’s my thing, but nice to see something new and it’s not $30 mystery boxes filled with clearance items. 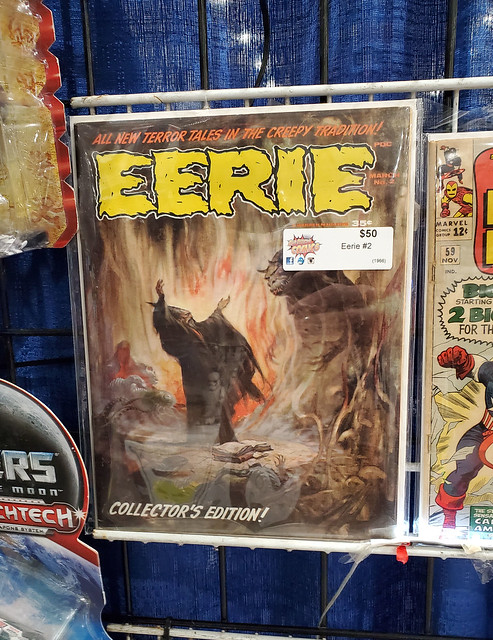 Thought I might come across some more books with recent announcements, such as key Bone or Bloodshot issues, but not much.  Maybe the Bloodshot trailer isn’t resonating with people. I did pickup a Ultimate Fallout for $20, felt that was a good price considering a sequel to Spider-verse is on the way. First appearance of Jane Foster (What If 10) was $85 and Thor 1 (Female Thor cover) was $35.  Overall the vendors were having a decent show as far as sales, everyone was having a great time, a lot of positivity at this con. 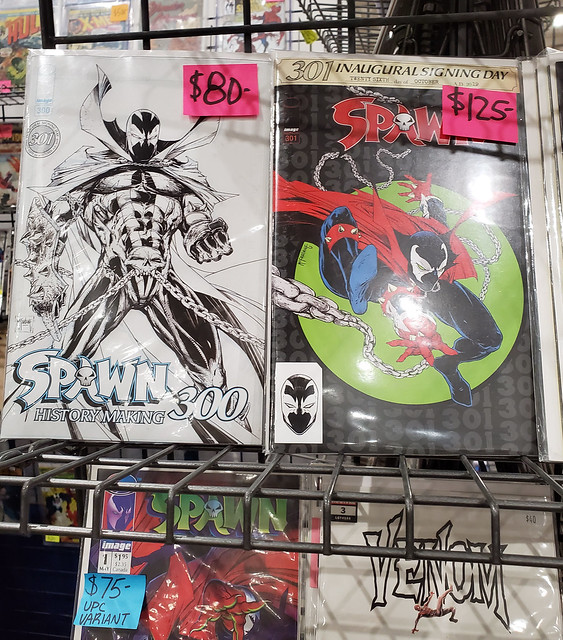 Spawn is hot!  Spawn books are everywhere, and saw a few of the Alamo Drafthouse Exclusives.  Todd did a recent signing in Chandler, AZ to commemorate Spawn 300/301 which makes Spawn the longest running creator creator-owned superhero comic series.  Limited editions of both books were available for signing and they are popping up on the secondary market at roughly $200 a set, even higher when signed.

As always, I appreciate every one of you that takes a few minutes to read my articles.  Enjoy the holidays CHU! And keep on collecting!