Back in August I got the pleasure of obtaining a review copy of the new Soldiers Unknown after getting an introduction from Cruzzer to the writer Chag Lowry. 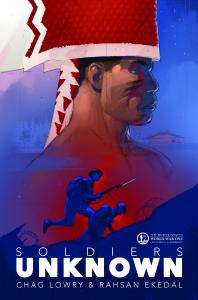 Being Native American Heritage month in this current month of November makes this review of Soldiers Unknown that much more sweeter.

This is the story of the ultimate sacrifice, soldiers being sent to the front lines in war.

But this is no ordinary story though. This is a story of soldiers, up until they were asked to fight a war they should have not even had a role in, were mostly untouched from the barbaric actions going on in the great World War I in Europe in the early 1900’s.

The Yukon Native Americans that lived relatively closed off from the rest of the United States in Northern California weren’t even considered citizens at a time they were now being asked to fight in war, likely with very little understanding or explanation of why they were fighting.

Plucked from their tribes and only way of life that they knew, three cousins trained as soldiers and are sent off to fight. Lowry perfectly depicts into not only the effects war brings onto those but the fear of the unknown future.

This novel brings forth the horrors of war through real life narratives of people who have already lost so much in their long and rich history. Rahsan Ekedal’s interior artwork adds to the amazing story, bringing it to life.

My only complaint after reading this graphic novel would be I wanted more story. This is the type of graphic novel I feel could have dived into more details between the time gaps of the young natives the story revolves around. It’s still a perfect novel though that elegantly tells not only the horrors Native Americans endured, getting dragged into war but also the racial boundaries and tensions as they were thrown in the mix with everyone from boot training to the front lines.

Unknown Soldiers is endorsed by the United States World War One Centennial Commission also by the  American Indian Veterans Association of Southern California.

You can order this amazing and historically factual graphic novel directly from Great Oak Press or at Amazon.