Home Sick Pilots is out this week and the following is a review by our very own Ein who’s a frequent CHU site and forum member. 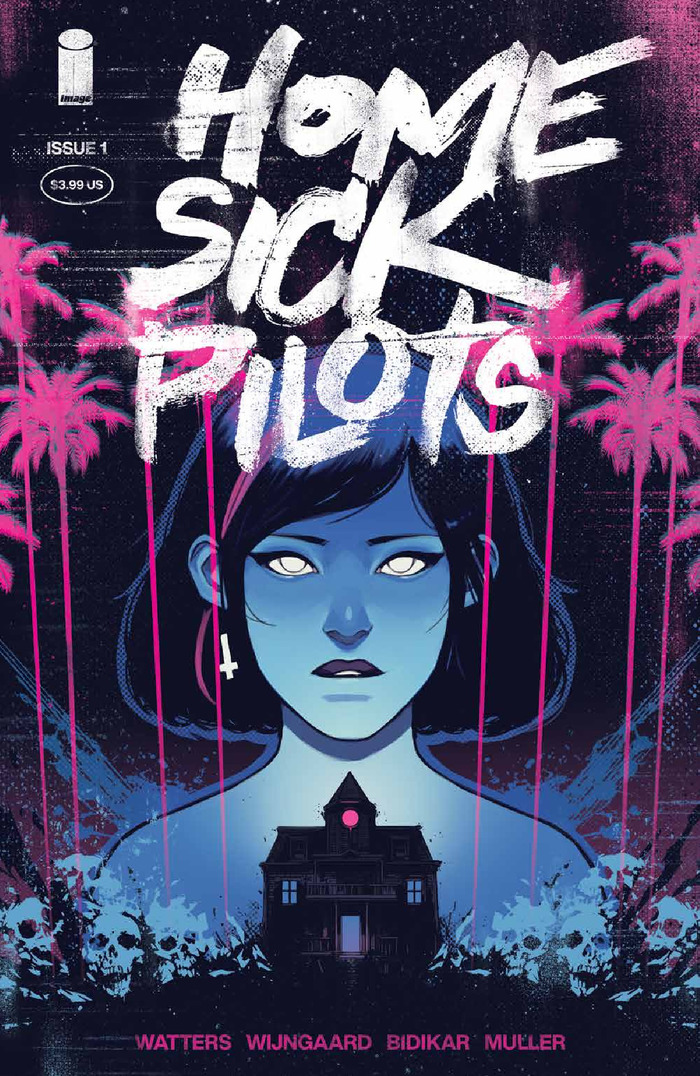 Out December 9 at your local comic shop, or online at TFAW, or other fine digital establishments.

(see the preview on CHU for more preview panels) In 1994 I was in high school. This was the fall I almost made the varsity soccer team. It was also the year of Sabotage, Come out and Play, and like half of Dookie; a good year in a string of good years for alternative/grunge/pop-punk music. Forrest Gump, a tour de force of nostalgia for the parents of those of us in high school, debuted during the summer this book takes place.

Home Sick Pilots is by no means Forrest Gump, but it is, in its own way, a comic book of nostalgia for the kids who were in high school in 1994.

So, what were the mid 90s like? The bottom four panels here are a pretty good window. Your crew, in clothes that ranged from out-the-bins-at-Goodwill to not-quite-Clueless (a 1995 movie, or, if you haven’t seen that then, um, Iggy Azalea’s “Fancy” video), beefing with your rivals by using stupid nicknames and biting but low-wattage comebacks. We goaded our rival town’s soccer “star” into getting himself a red card this way.

And, ultimately, this is one of the real treats, the way the book brings you back to high school with your friends (assuming, that is, that you’ve gotten beyond high school as you are reading this, and/or had people from HS you want to fondly remember). I should note, though, that even if this isn’t your time period the story doesn’t, so far, lean on that. It’s just a setting for a “Stand by Me meets Rose Red” Stephen King mash-up story. It’s horror, but it’s not hallways gushing blood horror, …errr, it’s not inanimate objects coming to life horror, …errr, it’s not systematically picking off minor characters horror, …okay so it’s not a Hitchcock.

Yeah, Home Sick Pilots is kind of trope-y, but in a really unpretentious way. It’s homage, not “Cars made us boatloads, let’s make it again but about, uh…. planes!” There’s so much more going on here than just a nostalgia trip, horror-trope homage. There’s a real story with complex characters brewing.

We find out that our titular band is made up of foster children (Rip alludes to it earlier about himself). Most (? I’m probably generalizing, but I’m not that far off) high schoolers are already trying to sort out who they are by testing the boundaries of their confines, but when you overlay that exploration with the emotional weight of moving through the foster system you get bravado and heart. After this there’s a really neat double spread from Winjgaard (with a lovely setup and payoff joke from Watters) that I won’t spoil and that is worth the time you’ll spend trying to figure out how you’re supposed to sequence the reading. And then the story takes off. There’s a slight twist at the end that will leave you pining for January’s second issue.

Watters’ writing is crisp and, like a good comic, the art and text play off each other so that you have to pay attention to both to get it all. All the characters are nuanced and though this initially feels like the assembly of a bunch of pieces you’ve seen before, there’s a reasonable chance it’ll be more than the sum of its parts. Winjgaard’s art is flexible to the moment; there are some deeply detailed panels and some wispy, ‘unrefined’ action shots that each serve the larger story well.

You definitely don’t need to have been in high school in the 90s to like this one, but it’s a special bonus if you were!

7 thoughts on “Why You Should Read Home Sick Pilots! A Review by Ein”