San Diego Comic Con, the Nerd Superbowl, started on July 18th.  This was definitely a transition year for SDCC. Almost everything is a lottery now.  On one hand, it’s an even playing field. On another hand, those who are more vigilant and willing to work harder don’t get an advantage.  Depends on your definition of fairness. Attendees could sign up in what’s called an “Exclusives Portal” for lotteries to all major signings and exclusive booths.  I entered for almost everything in every time slot. I won nothing. Squat. So we can say I wasn’t a big fan this year. My main request of SDCC is to only allow each winning attendee to win only once, since some people won multiples while some won nothing.

The effect on lines was clear though.  Hall H was easier to get into which is probably combination of changing dynamics and weaker lineups (no Marvel of Game of Thrones). Not that there wasn’t plenty of fun stuff going on.  DC has some good looking movies coming out with Aquaman and Shazam!, interesting to see DC going full comedy on the latter. Plus DC’s shows look great. Glass looks awesome, and can’t believe it’s even happening.  Unbreakable pulled off a dark and gritty superhero movie before that was a thing.

My favorite is the Godzilla King of Monsters trailer. I’m a huge Godzilla fan.  The last movie was amazing, I don’t care what anyone says, I loved all 12 minutes that Godzilla was visible on-screen!   Next movie I am most excited for is Venom, hopefully Sony will release the footage soon as I missed that panel. Reactions I have heard: Venom looks good, but some bizarre dialogue.  Hopefully this isn’t a movie with great CGI but bad script. I’m still rooting for it.

The exhibit floor is where the action is! Every major comics publisher is in attendance and they have plenty of hot exclusives that sell out. Once again the DC foils have a line every day at Graphitti booth. Although I don’t like having to compete for these, I am happy to see lines for comics.  Venom rules this con, all Venom books are hot. The Venom #3

exclusive disappeared from most vendors by Saturday. The J. Scott Campbell Ghost Rider

cover at the Marvel booth was a ghost by late Saturday as well.

For hardcore collectors like myself, it’s hard to buy back issues and keys with all of the gouging going on.  And really, I’m there to have fun not negotiate. Plenty of new stuff to grab anyway. Image/Skybound bring their A-game and variants are hot. Couldn’t believe the lines at the J Scott Campbell booth, his fandom is crazier than ever.  Lady Death exclusives were stellar as always, and sold out quickly. You may recall the mention of Lady Death in May at Phoenix Comicon. Since then Brian Pulido procured all his SDCC exclusives, completed and shipped the rewards for a very successful La Muerta Kickstarter, and is ready to launch his next Lady Death Kickstarter in 2 weeks. Guess Brian doesn’t sleep much, but all this hard work is why he was awarded the Inkpot award this year! A prestigious award handed out at SDCC to recognize creative people for their contributions to the comics, television, movies, or any medium for science fiction and fantasy.  Puts Brian Pulido in company with Alan Moore, Kevin Smith, Steven Spielberg, and Neil Gaiman to name a few. Congrats Brian! I’m just happy to finally have a copy of Frank Cho’s cover, double signed! 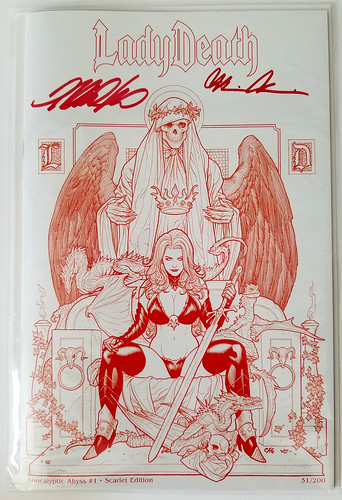 Disenchantment had a really fun booth, the show looks good. I was lucky enough to score the Matt Groening signing, and he sketched on the poster, so that was a dream come true. 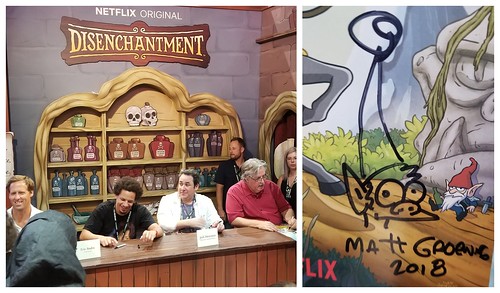 One of these days, I will be able to afford a Sideshow statue. Their booth has a massive footprint in the center of the con, detail is always incredible. 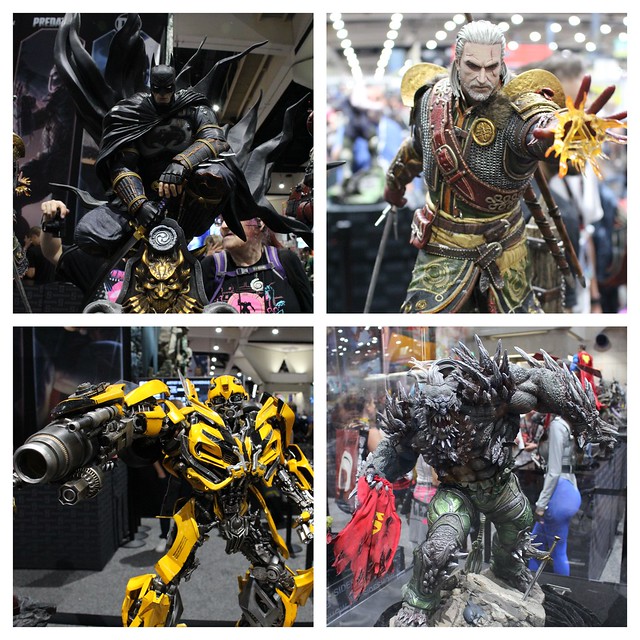 My highlight was getting a commission by Carla Wyzgala (IG: @carlawyzgala). I asked her to do Vampirella and she knocked it out of the park! I love hitting up Artist’s Alley and Small Press to find these rising stars. Check out Carla’s website, she does a gorgeous masquerade line and burlesque versions of comic characters. I have no doubt she will be doing sought after variant covers that we feature on CHU in the future. 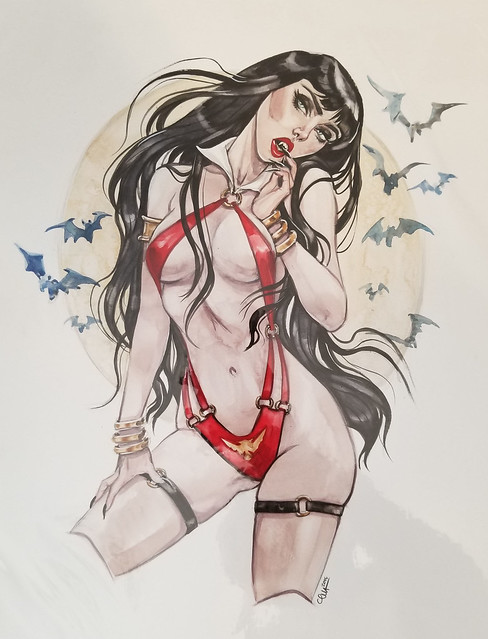 Even without Exclusive Portal luck, I was still able to get into signings for Adam Hughes, Artgerm, Lee Bermejo, Rick Remender, Joelle Jones, Terry Moore, and Donny Cates.  So many rock stars at one con! Plenty of lines as well, but so worth it.  Most of the artists are willing to do a quick sketch.

The other half of SDCC is the outside con. There are so many offsites, you can spend multiple days doing those without having an SDCC badge. One of the highlights was the DC Universe offsite with various character rooms. Such as a Harley Quinn Chaos Room where you could destroy stuff with a bat like HQ herself. DC’s streaming service will be interesting, they have a ton of quality content so it might work.  There is a Walking Dead experience, Impractical Jokers takeover Petco Park, a Tomb Raider experience, Adult Swim and FX takeover the lawn by the Marina, and Purge sets up a creepy Party City-like storefront. 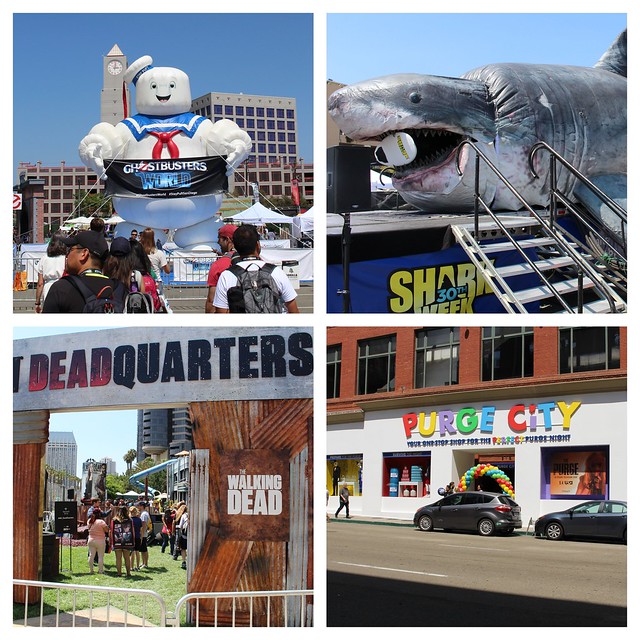 Endless offsite events as well, I could only make it to Funko Fundays and the Skybound meetup. Funko Fundays was insane as usual. The sheer energy coming out of that room is incredible, I can live off of it for days. With prizes, free food, and drinks, it’s easy to understand why these tickets sell out in seconds. 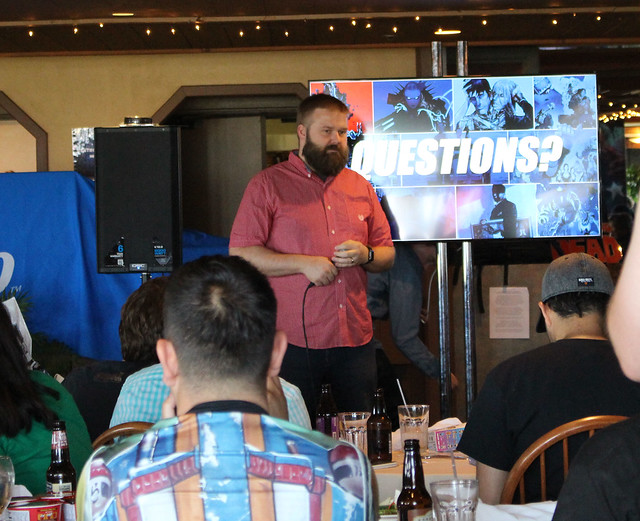 The Skybound meetup is another event where fans are treated like royalty. Free food, drinks, and goodie bags with awesome Skybound stuff. Robert Kirkman was very accessible to meet, and did a Q and A with the fans:

-When asked if he liked the differences between the show and the book, he said he really liked the show and feels they capture the essence of TWD writing which is to understand why the characters are doing what they are doing. When he writes, he really thinks about what makes the characters tick. If he’s doing his job, he spends enough time in Andrea’s shoes to understand why she does what she does. He later went on to say he loves changes to the show. Would be boring if they didn’t change it from the comics. Kirkman stated that show changes that made you mad were his own fault. But any changes that made you ‘really’ mad were Scott Gimple’s fault! (He was joking of course).

-Doesn’t plan on doing TWD spinoffs. Other comics that do spinoffs run the risk of losing  what was special about the original. But that doesn’t apply to tv. Spinoffs are very successful in the tv world.

-He is working on adapting Invincible into both an animated series and live action movie. Said the show will be very violent and not for kids.

-The Amazon deal does not affect anything with AMC. His role stays the same with AMC.  He does not normally write Walking Dead episodes, just consults with show runners. The Amazon deal just means all future Kirkman shows are on Amazon.

-Did the meth on Breaking Bad cause the zombie apocalypse? He answered no, it was just a fun Easter egg they brought to AMC and AMC approved.

Then, outta nowhere, Michael Rooker storms in! Couldn’t be happier to be writing about him again. He is crazy and totally hilarious. He goes running around crowd and very interactive. If you ask him a question, you never know if he will answer or start asking you questions. The crowd really connected with him. He wouldn’t wrap up when staff asked him to and eventually they cut off the mic. But the place was small enough and he was loud enough to carry on another 10 minutes. This was a hall of fame SDCC event for me, thank you Skybound! 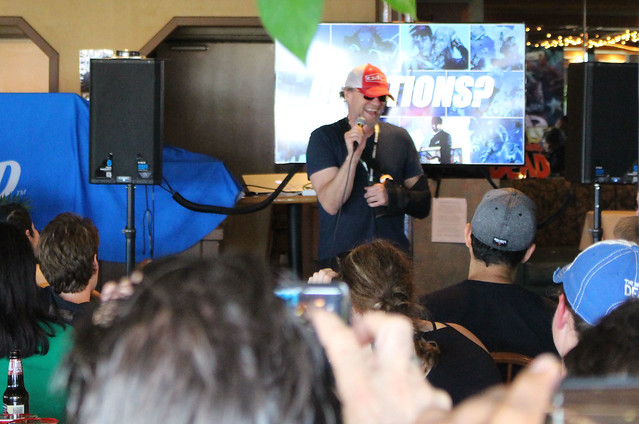 The cosplay is the biggest and best of the year, check out the gallery.

Another year of madness in the books!  Come down to San Diego if you can, even without a badge there are adventures to be had. And thanks you CHU for reading my stuff, this little community Anthony started is filled awesome and positive people. Don’t ever change!