Independent publisher Coffin Comics builds lifelong relationships with fans through interactive events online and locally. Coffin Comics hosted a party in Tempe, AZ for the launch of their newest Kickstarter – Lady Death: Blasphemy Anthem.  It was a great night, I can’t believe how many awesome friends I have made through Coffin events over the years. 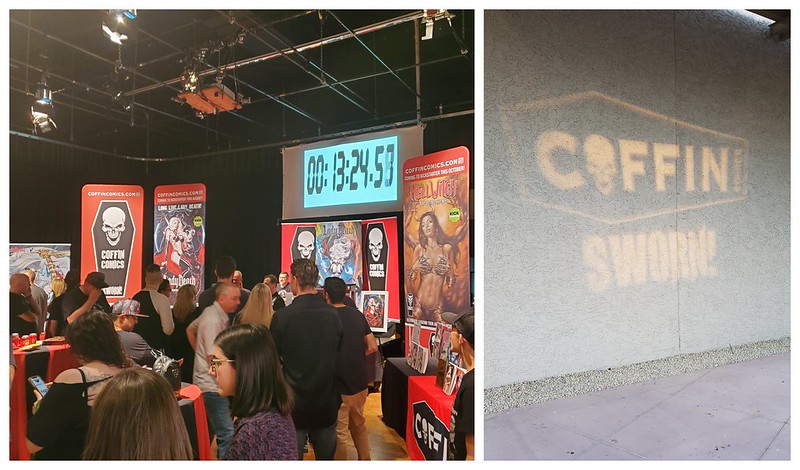 Brian Pulido and his Coffin Team went big for this event, setting up in a film studio to display all the Kickstarter books and livestream the event.  The hype was real with a big turnout including many of the Coffin writers and artists to mingle with fans. I probably didn’t see everyone but I ran into superstar artists like Marat Mychaels, Anthony Delaney, Sam Sawyer, Mike DeBalfo, as well as writer Mike MacLean.

I also ran into comic retailer pioneer Jesse James, we have featured several of his retailer exclusive covers on CHU before.  Jesse is fascinating to talk to about the comics business, he is making some innovative changes to his business model.  It makes sense Jesse and Brian are friends, they both have the “all about the customer” mentality. Side note – check out Jesse’s “The Binge” stream on the Comic Book Shopping Network: he sells comics at great prices plus shares tidbits from his vast knowledge so it’s fun to just watch as well.

And of course, it wouldn’t be the same without Lady Death herself!! 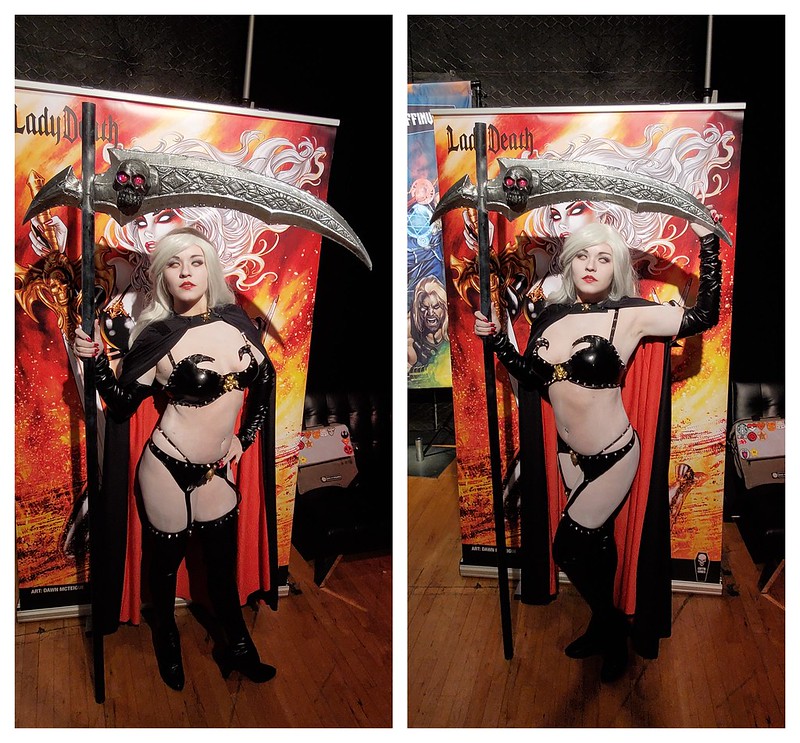 Rockstar Cosplayer Sapphire Nova brought her newly designed outfit with a classic Lady Death look and lots of metal spikes! \m/ I saw some fans brought the exclusive cover (that features her) for her to sign. She’s very personable and a great representative for Lady Death and SuperHeroes Unlimited.

Things got VERY loud in the final 10 seconds!

Then suddenly quieted down to a hush as most were logging into Kickstarter to back. The Kickstarter page displayed on the big screen while the numbers just kept jumping. They reached goal in about a minute, and were over $100k in 20 mins, incredible.  This may be the biggest one yet. There was also a limited edition preview book for the first 150 in-person backers. 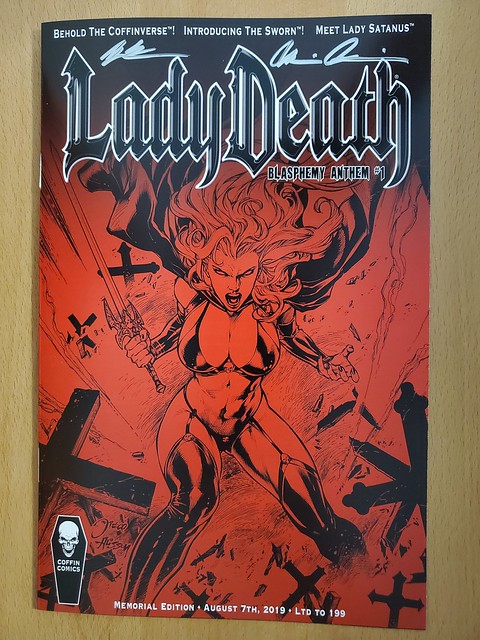 Something for everyone in Coffin Kickstarters.  There is tiers for new readers, and you can get the book for $26 which would include the stretch goals pack which usually includes merch worth well above $26. Then for the hardcore collectors, there are premium tiers with extremely limited covers.  The top tier features a Mark Brooks cover limited to 88, which is nuts. Brian confirmed those are all that will ever be printed and the image will not be on a comic cover again so it’s the read deal rarity. The Legend tier is already sold out, you can still get onto Megaballer tier as of this writing but not many left.

I look forward to this one as it brings the Coffinverse, Lady Death’s battle will have a crossover with some of the other characters that have been introduced in Coffin books over the years.  Personally, I am excited since I loved crossovers as a kid. In adulthood, I have no interest in ‘big two’ crossovers any longer, but VERY interested to see how Coffin approaches it. I also understand this book will have heavy impacts, there will be some first appearances and Lady Death herself will face some major changes that could impact her storyline for several issues to come. 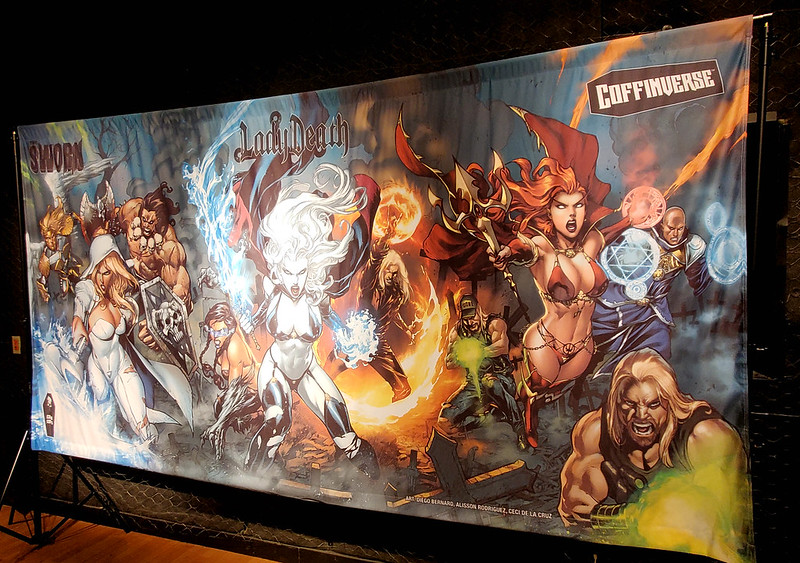 Keep an eye on Coffin over the next several months, they are looking to keep expanding their product line for fans.  Their next Kickstarter in October is going to be hot, Lucio Parrillo is a big star and his cover looks incredible. 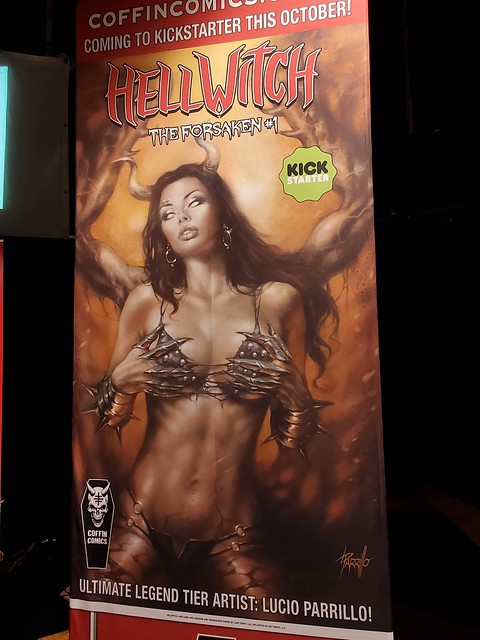 Check out the Kickstarter here, or you could sign up for their newsletter to keep updated.  Personally, I really enjoy purchasing from them direct via Kickstarters and their site. Sometimes they will post a small allotment of their con exclusives, but you have to be fast.  Here’s to many more Kickstarters and Infinite Coffinverses!! Cheers CHU!!!! 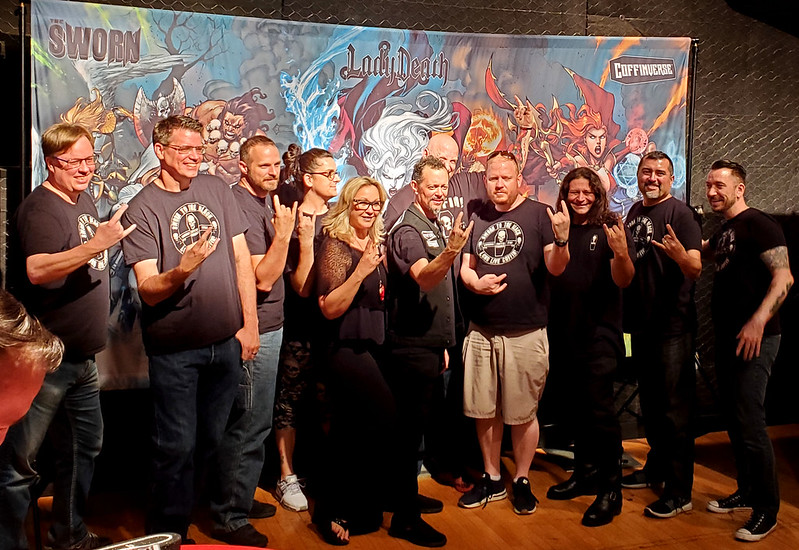 16 thoughts on “Into The Coffinverse! CHU at Lady Death Kickstarter Party”