Louie M. covers West Coast conventions for www.comicsheatingup.net
What up CHU!! Ace Comic Con took place in Glendale, AZ on January 13-15.  It’s important to set the bar right when judging ACC, this is their first year of existence and their second show ever. Given that, the guest list is bonkers for a new con: Chris Evans, Tom Holland, Sebastian Stan, Jon Bernthal, Hayley Atwell, Hulk Hogan, and many more from the cast of Captain America and Spider-man.
I saw some social media posts calling it a “celebrity con”, but far from it, the comics/creators list should satisfy even the most major hardcores.  On their first trip to the southwest, Ace brings: Stan Lee, Todd McFarlane, John Romita Jr., Adam Kubert, Tyler Kirkham, Mark Bagly, Bob Layton, Greg Horn, Matt Hawkins, and many more (http://www.aceuniverse.com/events/arizona/creator-spotlight.html/).  Needless to say, comics fans and CGC/CBCS had a busy weekend, many books were witnessed and signed.
The con opened on a Saturday at Noon, so lines to get in were heavy, but well managed. An aggressive move was having the Captain America panel starting at 12:30 p.m., 30 mins after doors opened. On the other hand, it was a hyped way to start the day.  Ace even had a camera crew in the audience intermittently interviewing people and doing impromptu dance parties to help pass the time until the panel starts. 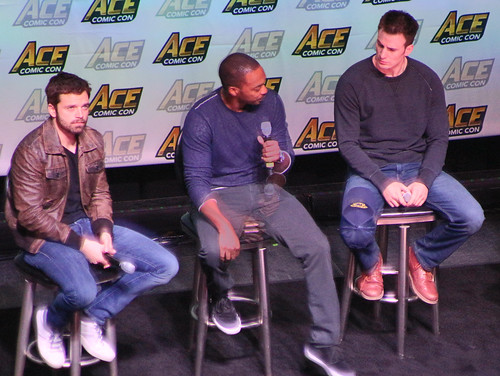 During the Captain America Panel, which included Chris Evans, Sebastian Stan, and Anthony Mackie:
-It was mentioned they just finished filming Avengers. Evans has been in more superhero/comics films than anyone else. Total of 15 including 8 times as Cap America.
-Anthony Mackey stole the show, he is seriously funny.  One question was what if Avengers fought Justice League. He jokingly answered “who’s that?”.
-Sebastian stated that he once talked to Hugh Jackman asking if he would consider coming out of Wolverine retirement for an Avengers team up. Jackman said he would consider it even though Logan was supposed to be his last. So there’s a chance!
-While reminiscing about shooting the big team up scene with the whole Avengers cast, as briefly seen in the trailer, Anthony mentions Tom Holland and the crowd screams. I underestimate his popularity in the Marvel fandom.
-Average life of Cap’s shield on set is 4 days. They don’t want the shield to have scratches and chips, so the prop has to be replaced often.
-Anthony mentioned the state of the comic book industry, cited some stats regarding the short list of titles selling over 100k copies per month.  With the backdrop of how superheroes are more popular than ever but the medium that started it is struggling, he basically gave the crowd a call to action to buy comic books. Anthony, I salute you sir! 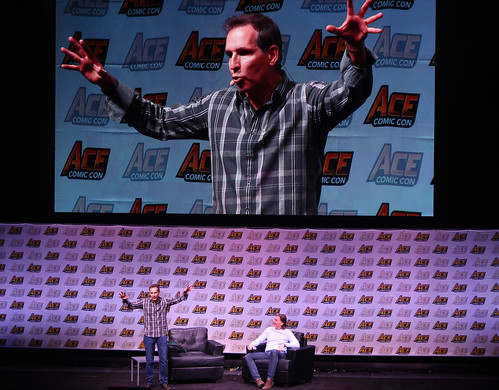 Todd McFarlane gave one of this usual high energy panels:
-He likes to talk business, discussing how we are in a lucrative moment for intellectual properties with the rise of Amazon and Netflix productions. Cable business model is hurting. Todd’s advice is if you have an idea, get it on paper while publishers and companies like Amazon are buying up IPs, and we don’t know how long the window will last.
-His energy and verbal pace makes him almost a motivational speaker.  Most of his panel is advice driven. Things to think about if you are a writer and creator.  Tips and tricks of the trade. Much of his advice is effort based.  “I’m not always the first choice for the job, but I put in the work”. He wants to stress that he’s not lucky because of Spawn, he puts in the hours needed for the job whether it’s Spawn, other comics, toys, or anything else.
-Todd has been getting regular calls to do another Spawn movie, even with 100 million dollar budgets. Todd was not going to agree to a Hollywood movie unless he gets to write, produce, and direct. A deal was made with Jason Blum of Blumhouse which put out movies like Get Out, Split, and Insidious. Awesome horror movies that did big numbers on a small budget.  Todd went on to say that “if you want a superhero movie, spawn is not your thing.” That is what DC and Marvel is for.  This will be a “dark, nasty, R-rated, creepy, scary movie.” And applause ensued!
To end off the panel, he promised they will do a Spawn premier in Phoenix. 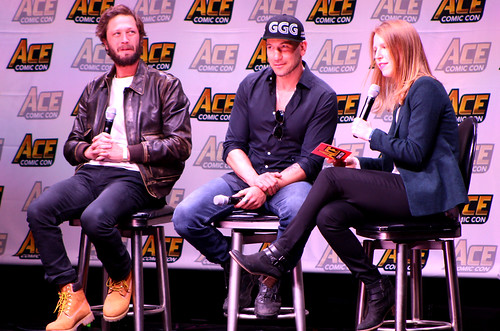 The Punisher panel included the very affable Jon Bernthal and Ebon Moss-Bachrach.
Jon expressed how important that symbol is to people, especially the military.  People in military put their lives on the line wearing that symbol and he takes it very seriously
Additionally, he praised the Punisher comics and encouraged everyone to go out and read them.  Especially Punisher Max, citing that the series is “hardcore shit”. Which I totally agreed with, the Max books took Punisher to another level. 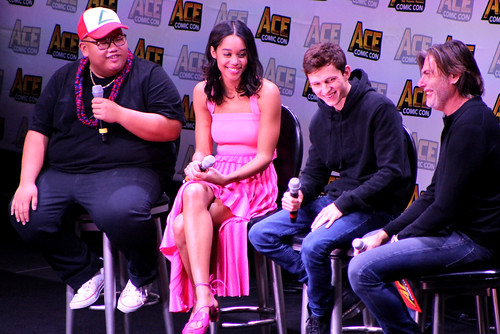 The Spider-man panel was mostly young ladies screaming for Tom Holland, but also included Laura Harrier and Jacob Batalon from Homecoming.  Tom was humble about it though, expressing his desire to make the fans satisfied with Spider-man.  He stated that he felt Civil War was his audition to the fans for being Spider-man.
There was a wide variety of other panels to check out with other Marvel Universe stars, wrestling stars, and many comics discussions including a master’s drawing class with Joe Benetiz. 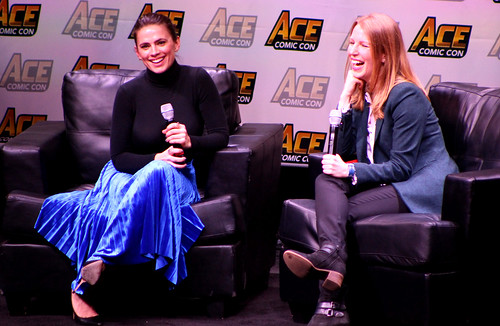 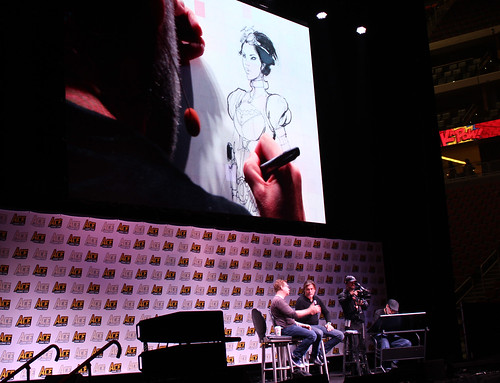 The flu hit the celebrity experience of the con, both Chris Evans and Carl Urban had to bow out due to illness. Evans made it through the first day. The news disappointed many fans and I do feel bad for them. This is why my advice is to never get your heart set on one goal for any comic con. Nothing is ever guaranteed even if you paid for it (Ace provided refunds for anyone affected), it’s just the nature of conventions, too many moving parts for it to run 100% flawless.
The exhibit hall was split between the arena floor and the concourses surrounding the seating.  It appears the product vendors for items such as pops, mystery boxes, and T-shirts were downstairs in the arena and artists/creators were on the concourses.  Picked up some awesome exclusives from Unknown Comics and KRS.  Got several signed by the gracious Tyler Kirkham (http://www.tylerkirkham.com/), he has been killing it lately with exclusive variants.  One of my favorite writers, Matt Hawkins, was there.  Very nice guy always willing to take time to chat with the fans, I now have the full run of Think Tank signed.  Additionally, I picked up some signatures from several of the previously mentioned creators. It was a crazy busy weekend for comic lovers.
I got to pick up several retailer exclusive variants I had been wanting from Unknown Comics and KRS Comics.  One retailer I met that was under my radar was Legends Comics from CA (https://www.legendsfresno.com/), picked up some sweet exclusive covers from Neal Adams and Ashley Witter for great prices, and very cool people to chat with at their booth. Good dollar bin diving as well, grabbed a bunch of New 52 #1s and scored Seven to Eternity 1 for a buck! It was a loot heavy and wallet bashing show for my collection!
The haul…. 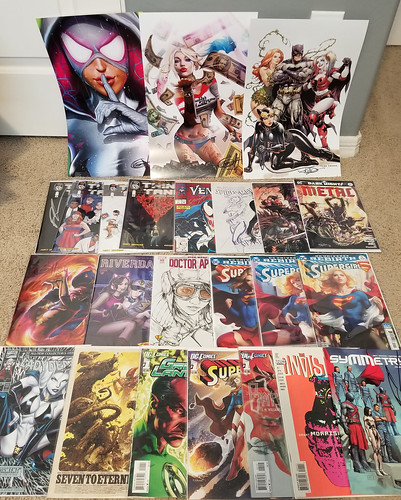