Phoenix Comic Fest (formerly Phoenix Comicon) took place over the Memorial Day weekend.  2017 was a rough year for the event: staffing issues, near shooting incident, and taking on SDCC over the use of ‘comic con’ name. That’s all in the past now and they have revamped the con for 2018 in many ways. Now wristbands are mailed in advance, far more security checkpoints/entrances, and a slew of minor improvements throughout the convention center.
Really great energy and vibe this year.  Food, refreshments, and seatings were more accessible.  There were several soda wagons inside and outside of the convention center that were selling really nice metal mugs; if you purchase one you could get unlimited soda refills, this was insanely popular.  Plus you could keep the mug and go home and make moscow mules! 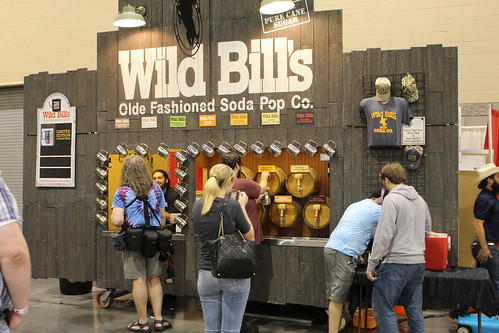 Outside was lively with stage for DJs and bands, a beer garden, and saber walk.

Happy to see the return of swag!! A Playstation truck giving away loot like sunglasses and beer koozies. Inside the truck you can play games, God of war looks incredible! There was also tables giving away Incredibles 2 posters/masks, and Solo swag. 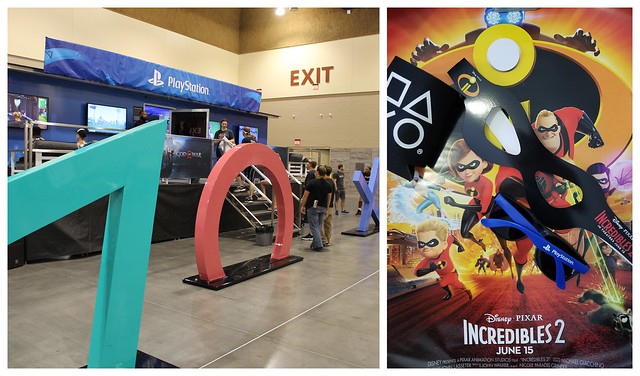 Comics guest line up was one of their best in years. Attending was Scott Snyder,  Todd McFarlane, Frank Cho, Brian Azzarello, Greg Capullo, and Jae Lee to highlight a few. I didn’t have as much time this year for celebrity panels due to all of the signings I went to. Let me SHOW YOU WHAT I GOT: 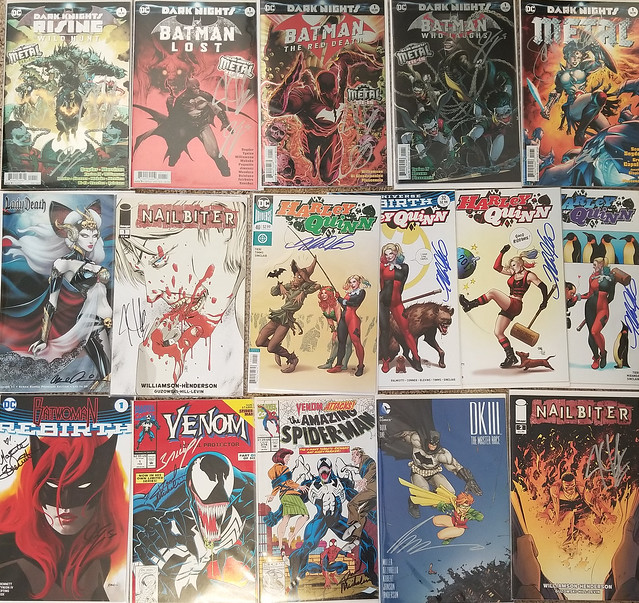 PANELS
My favorite comics panel of the show was the “Making the Modern Batman” panel with Scott Snyder, Greg Capullo, and James Tynion IV. There was no moderator for the panel, as Capullo announces “thats okay, I’m italian so I never shut up!” (lol) 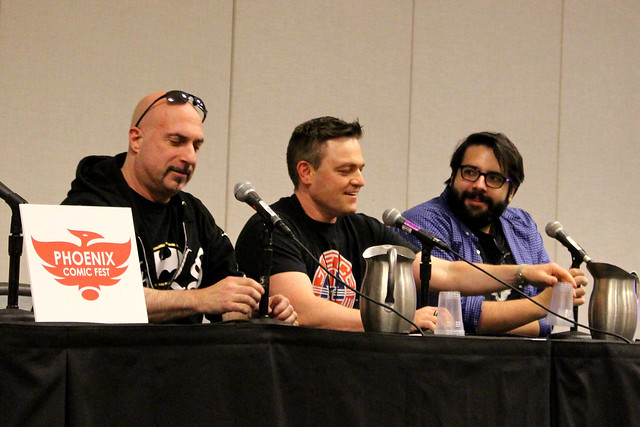 Tynion discussed his current run on Detective Comics. He wants to bring back strains of characters who have fallen by the wayside. Sort of an X-men-like take on the bat family.
Scott Snyder stated that his run on Justice League will have more of the dark multiverse and Batman Who Laughs (one of the coolest new characters created in the last year). He said there will be a big payoff for those who read Metal.  He wants to bring back the Hall of Justice and have it play a big role to show how all of the heroes need to work together due to the size of the threats coming. The Hall of Justice is supposed to be connective to the DC Universe, all characters are invited. Scott wants his Justice League run to be cumulative like Infinity War, where it feels like all these previous stories and easter eggs all come together.
Capullo spent some time talking about designing the Metal characters. Scott describes the characters to Greg, then Greg gets to go create, striving to capture the essence of a character.  Red death, for example, had spoilers to look like a race car. Greg wanted a alternative version of Flash that looks crazy fast, and to avoid previous versions of the Flash.
Snyder is also working on a final Batman book with Capullo. It will be a black label for mature readers. Coming out later this year, the story takes place 20 years ago. He said that this book is basically going to be the end of ‘their’ Batman they worked on during the Snyder/Capullo run on the flagship title. Snyder left us off with a vision of what the opening pages will look like: Batman wakes up young in a wrecked Bat-suit. As he looks around trying to figure out when/where he is, he finds a talking Joker head that says “I’ve been waiting for you”…. 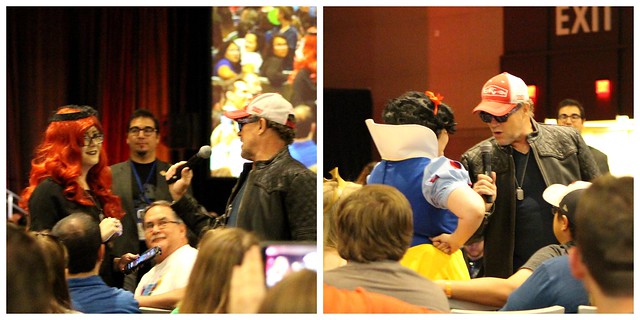 Michael rooker was crazy!  It was the only celeb panel I could attend but was one of the most entertaining I have been to. He knows how to work the crowd.  He runs onto the floor for a Q and A, moderates himself. He scrambles all throughout the crowd for people with questions. His answers were witty and hilarious.  When asked what his favorite moment on Walking Dead was, he replied “When Norman stabbed me to death and I knew I wasn’t coming back, so I could go do Guardians of the Galaxy!”
THE EXHIBIT FLOOR
The sprawling exhibit floor is my favorite place to be, there is a great mix of vendors year after year.
Looks like comics talent charging for signatures is a sad trend that’s not going away. It’s not that I don’t budget to spend some money.  When a creator/artist doesn’t charge me for a signature, I will always buy something from their booth. Everyone probably doesn’t go by my little “code of honor ” so I see why they charge. But it still feels like double dipping. What grinds my gears is I buy their product off the shelf which is when they really need fans to buy to keep their income flowing, now being charged again to have them sign it. I’m not going to spend extra money after paying for a few drops of sharpie ink, and may even question buying more of their product off the shelves. There’s gotta be ways to make it more digestible. Maybe offer a COA if you charge. Or maybe offer a discount at a certain point (e.g. First 1 free, then $5 per sign up to 5, 10 signs for $25, etc).
If you read my past articles, you know the party is at the Lady Death booth! Creator Brian Pulido is one of the most affable people in comics (and he will sign whatever you want without charge!).  I heard him mention it was a record show, and I am not surprised. I went straight to his booth on opening night and there was a line around the booth for show exclusives. He was selling out of stuff left and right.  I also picked up his mystery flash exclusive which was an amazing holo foil cover by Bully Tucci. Yet another line and sellout and sellout for that. The daily raffles draw quite a crowd as well.
Check out Pulido’s newest Kickstarter for La Muerta. It’s not exactly Lady Death, more of a hardboiled crime revenge noir. I think it has a big future as the storyline expands, keep an eye on it. It’s also more grounded in reality, so it’s ripe for other forms of media. The cheapest shipped option is $24 and the stretch incentives alone are worth more than that.  https://www.kickstarter.com/projects/brianpulido/b-pulidos-newest-graphic-novel-la-muerta-1-retribu 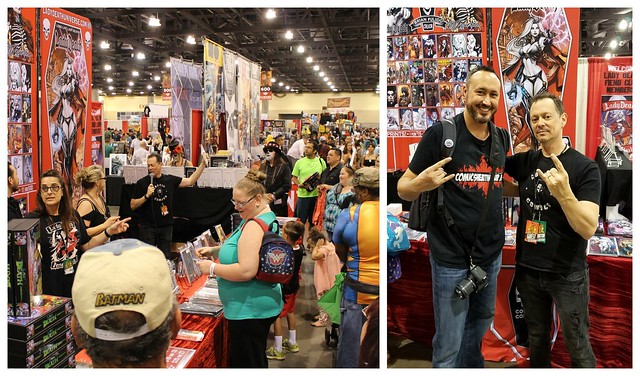 Every year becoming a bigger fan of Ashley Witter.  She has been delivering stellar work on her variant editions.  I brought my Doctor Aphra 1 for her to sign and picked up a few more books and prints from her booth.  Hope she comes back next year! http://ashleywitter.com/
A new discovery for me was David Harrigan.  I saw some of his work around the con at the Brian Pulido and Marat Mychaels booths.  He was a super cool guy and we spent some time jamming out over our love for the band Ghost.  Hope to see him next year, maybe I can score a commission from him. Check out his work! http://artassassin.com/
Another artist I discovered from the vortex of Lady Death exclusives was Brian Miller.  He has a very cool and vivid style, coloring is incredible. http://www.oktopolis.com/
I used CBCS for the first time to compare the overall experience to CGC.  I would have to say the customer service experience was superior, the guys running the booth did a good job of making sure everyone was getting helped in a timely manner.  I was less than thrilled with the estimated 12 week turnaround time. Additionally, if I wanted anything pressed they said it would add ANOTHER 12 weeks. So CGC seems to have them beat on lead time.  Let’s see how long it really takes, and what kind of packaging I receive.
I heard mixed reviews from vendors sales.  Some suffered low sales due to smaller crowds this year, yet I heard several that were very happy with sales. Still tons of mystery box booths (please find better things to spend your money on, these boxes are filled with bargain bin junk), and Funko products are everywhere. The comic booths I spoke with said Venom was hot, and anything with Thanos on the cover.  I also heard Walking Dead was selling well, but that’s basically every con over the last 7 years. Here are some prices I found:
Venom Lethal Protector 1

– I could only find 1 in the whole exhibit hall, marked at $10
Overall, it was another great year at the big show in Phoenix.  I think this year could be a new beginning for the show, they made some much needed improvements to the experience and should build on it for next year.  Just recently, they announced another name change as many people gave feedback that “comic fest” doesn’t really roll off the tongue. Yet, they can’t go back to comicon unless they want to spend some time in court with SDCC.  So next year will be Phoenix Fan Fusion! Come out if you are in the Southwest next May! https://phoenixcomicfest.com/